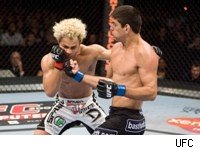 Among the storylines somewhat hidden due to the stacked card at this weekend's UFC 100 is whether or not Brazilian Paulo Thiago has the goods to become a true welterweight title contender.

Thiago debuted at UFC 95 in February, signing a one-fight deal. His opponent was Josh Koscheck, making Thiago a decided underdog in the match, but shockingly, he TKO'd the usually durable Koscheck in the first round.

The victory was surprising as much for the method as the result. In his 10 previous fights, he had only one other TKO, and that was due to an opponent injury. Seven of Thiago's wins had come via submission (he remains unbeaten at 11-0).

While many people look at him as a fluky winner in that matchup, Thiago knows that a win over Jon Fitch would immediately stamp him as the real deal.

Thiago remains a bit of an enigma because prior to facing Koscheck, all of his 10 fights took place in Brazil, and not a single one of his prior opponents had ever fought in a major promotion, making it difficult to gauge his talent level. Had he simply run through lesser competition, or was he steamrolling opponents due to his superiority?

A second look at Thiago's win over Koscheck shows holes in his striking game; namely dropping his hands after throwing punches. He also shuffles awkwardly, has little head movement and just flat-out looks uncomfortable. Then again, against Koscheck, he never once tried to take the fight to the ground, which either suggests he had confidence in his standup game or that he lacked confidence in his ability to take Koscheck down.

Given that Fitch is also a very strong wrestler, we may see Thiago choose to stand up with him as well. If the fight does go the ground, Fitch, like Thiago, is a Brazilian jiu-jitsu black belt.

Interestingly, this fight is guaranteed TV time ahead of the matchup between UFC Hall of Famer Mark Coleman and crowd favorite Stephan Bonnar, as well as that of top prospect Jon Jones.

Fitch, who is 18-3 with one no contest, is likely still at least two more wins away from another crack at a title shot, so the biggest upside to having a match like this on TV is in potentially showcasing the unknown Thiago. If he scores back-to-back wins over Koscheck and Fitch, he immediately becomes a star the same way Houston Alexander did when he burst on to the scene with KO's over Keith Jardine and Alessio Sakara. Thiago will have a chance to put an exclamation point on the statement he made against Koscheck, or he may prove a one-hit wonder.