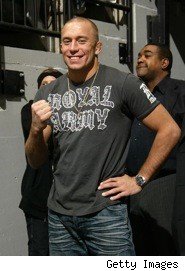 Looking at Georges St. Pierre's list of opponents throughout his career, you can make a substantive case that GSP has faced the toughest list of foes top to bottom of any high-level fighter. Suffice it to say that given his resume, St. Pierre has faced some studs, but a closer look reveals a lengthy series of opponents who were primarily ground fighters.

His UFC 100 welterweight championship fight with Thiago Alves will be different, in that it will present him his first opportunity to fight a striker since a November 2003 fight with Pete Spratt.

So how will it go? Let's take a look.

Alves is no ordinary striker. He packs devastating power in his hands, feet and knees, giving St. Pierre many weapons to avoid. Prior to his decision over Josh Koscheck last October -- one in which he rocked Koscheck several times -- Alves had managed five straight KO or TKO wins. In that time, he's gotten noticeably bigger, stronger and vastly improved his takedown defense.

The last of those factors could pay the biggest dividends against St. Pierre, who is arguably the most efficient takedown artist in MMA.

Much of this fight will hinge on whether or not Alves can stay upright. If he can, it becomes Alves' power against St. Pierre's versatile striking game, and becomes a pick' em fight. If he can't, St. Pierre will have a strong edge on the ground with his nearly unshakable topside control, guard-passing skills and effective ground and pound. In addition, St. Pierre has better submissions.

So any prediction has to guess first and foremost whether or not Alves can stay upright long enough to beat GSP.

Working with Greg Jackson and Firas Zahabi, St. Pierre has put his trust in a pair of trainers that have repeatedly proven themselves capable of putting together winning game plans. While Alves is renowned for his Muay Thai skills, few people know that Zahabi's background is in Muay Thai, giving GSP an excellent resource in preparing. In addition, GSP's camp flew in several Muay Thai specialists to simulate Alves' striking. So rest assured that GSP will be well-prepared.

Alves also trains with an excellent camp, American Top Team. While hardly one-dimensional, Alves -- with only one career submission win, and that being a verbal one -- has never done much to distinguish himself on the ground. ATT fighters, however, say that his ground skills are quite strong. Still, where he shines is attacking on his feet. He has quick and explosive hands, and throws some of the hardest leg kicks in the game.

Many people point to Alves' success in denying takedowns against Matt Hughes and Koscheck and project that GSP, too, will have difficulties, but it's not an effective comparison. Hughes has never been a big threat standing up, so Alves could key on stuffing takedowns first before unleashing his own offense. Koscheck took a fight with Alves on short notice and has never been a fighter who studies tape and crafts a game plan for his opponents. GSP will be much more well-versed on Alves' tendencies. And Koscheck only looked at takedowns as a secondary device when he found himself in trouble or when the fighters naturally moved against the cage. Desperation takedowns are easier to see coming, and also are being intiated by a fighter who is already damaged, making it less likely to be successful.

St. Pierre is a different case because he is easily the most dynamic fighter at 170, capable of showing varied approaches throughout the scheduled 25-minute bout. Much like a baseball pitcher with a vast repertoire of pitches is a nightmare for batters, St. Pierre is difficult to compete against because you never know quite what is coming next.

Alves' best bet is to use leg kicks, which will take away some of the spring in GSP's step and slow his takedown attempts. But it's a double-edged sword because leg kicks are also something opponents key on when they are intent on getting the fight to the ground.

Another element some are forgetting about is conditioning. Alves has had issues cutting weight in the past, and perhaps more significantly, has never before had to train for a five-round fight. For GSP, it's old hat, so he has to be given an edge if the fight goes into the championship rounds.

It is clear that GSP has more ways to win. He is an excellent striker, with top-notch wrestling and jiu-jitsu, and he scrambles well in transitions. Alves is most likely to win by knockout or TKO. As we know, GSP has been finished before, so it's not impossible, but he's also more mature, confident and complete than ever.

No one would be shocked if Alves' striking decided this bout, but most people expect GSP's diverse attack to win out in the end, and that scenario seems more likely to happen.