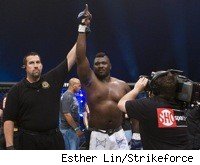 Following Brett Rogers' impressive 22-second knockout of Andrei Arlovski on the June 6 Strikeforce event, many suspected that he would be next in line to fight for the organization's heavyweight title. However, Rogers' trainer/manager, Mike Reilly, told FanHouse Monday that he isn't surprised that Rogers isn't getting the first crack at champion Alistair Overeem.

Reilly went on to say that he thinks "Werdum will submit [Overeem] quick and easy.

"I think Overeem was a good champion for Strikeforce when they were a smaller show. Obviously, we want the biggest challenge we can have and we think that's Werdum."

Reilly added that he was always planning on having Rogers fight again in October, and that he would like to have him compete two more times this year. He mentioned that he was initially surprised to see Werdum get a title shot in his first fight for Strikeforce, but upon further reflection, he thought it made sense because "if I was Overeem, I would avoid Brett too. it's a horrible f***ing fight for Overeem."

And if that wasn't enough, Reilly issued this warning to the entire heavyweight division on behalf of Rogers:

"If you are under 250 pounds right now, just forget about fighting Brett Rogers because all that is going to happen is that you are going to get your head spun around."