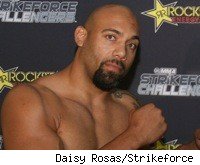 Strikeforce heavyweight fighter Lavar Johnson is recovering at a local Bakersfield, Calif., hospital after what appears to have been a successful surgery Monday morning.

When FanHouse contacted Zinkin Entertainment, the organization which represents Johnson, a publicist issued this update:

"Lavar underwent surgery this morning for internal injuries. The surgery was a success, and he is currently in stable condition. He sustained life-threatening injuries to internal organs. We ask for everyone to continue to keep Lavar in their prayers."

Johnson and four others were shot early Sunday morning at a family reunion/Independence Day celebration in Bakersfield. FanHouse has learned that the deceased Anthony Mack Johnson, 37, was Lavar's cousin.

Lavar Johnson was scheduled to compete on the undercard of Strikeforce's August 15 card in San Jose, Calif.