Frank Mir, Brock Lesnar Say They Don't Dislike Each Other 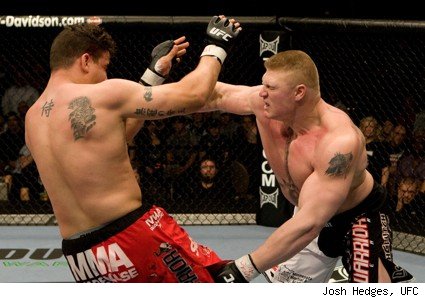 A few months ago, it seemed like we couldn't go a week without hearing Brock Lesnar and Frank Mir talk trash about each other. Mir compared Lesnar to Junie Browning, which from Mir's perspective is about as harsh as an insult can get. Lesnar called Mir's interim heavyweight championship a "make-believe belt."

But as their UFC 100 fight approaches, Lesnar and Mir are toning down the rhetoric.

"I don't dislike Frank in any way other than he's got a win over me," Lesnar said on a call to promote UFC 100. "This is a sport. I consider myself a gentleman, and sportsmanlike conduct takes precedence in this."

Mir, who beat Lesnar at UFC 81 and has suggested since then that the UFC tried too hard to build up Lesnar to attract pro wrestling fans, said he just views Lesnar as another opponent.

"I have no hard feelings with anybody I compete with," Mir said. "I think any professional athlete, you get him going and he starts talking about his competitors. ... We're definitely riled up and ready to go. I think if there's any animosity it comes from both of us because I think neither one of us feels that we have the respect we should have, and that we want to attain in the heavyweight division."

The winner of the Mir-Lesnar fight will certainly get a lot of respect, although even then, that respect will come with one caveat: Most MMA observers believe that this summer's true heavyweight title fight in MMA is the one between Fedor Emelianenko and Josh Barnett at Affliction Trilogy. Just consider that one more reason for Mir and Lesnar to be motivated, even if they're not motivated by hatred for each other.