Wilson vs. Pyle Booked for UFN 19 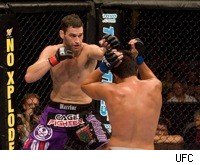 A welterweight fight between Chris Wilson and Mike Pyle has been scheduled for UFC Fight Night 19 in Oklahoma City. Sources confirmed with FanHouse Sunday evening that the bout will be made official later this week.

UFC Fight Night 19 is scheduled for Sept. 16 at the Cox Convention Center. Gray Maynard will reportedly face Roger Huerta on the same card.

Wilson told CageWriter.com that the Nevada State Athletic Commission would not clear him to fight Larson due to a "private issue." He went on to say that the issue had to do with "blood work and my prescriptions being approved."

It's been a difficult year for Wilson, who also survived an armed robbery in his home in Brazil in May. The former IFL fighter holds notable victories over Jay Hieron and Rory Markham, and is 1-2 in his UFC career.

Pyle lost to Larson via first round arm-triangle choke. Prior to the loss, he had won his last four fights in a row. The Xtreme Couture fighter had to cut over 20 pounds in less than a week before the event just in case the NSAC did not clear Wilson.