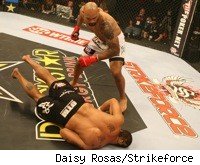 Strikeforce heavyweight fighter Lavar Johnson (right, standing) is being treated at a local Bakersfield, Calif., hospital after being shot multiple times late Saturday night. Strikeforce director of communications Mike Afromowitz confirmed with FanHouse that Johnson was injured in the shooting, but had no further information regarding his current state. The Bakersfield Police Department would not update Johnson's condition when contacted Sunday night.

According to The Bakersfield Californian, the incident occurred at a family reunion/Independance Day celebration at a residence in Bakersfield. When police arrived on the scene, five victims were found with gunshot wounds. Four were taken to a local area hospital with "minor to moderate" injuries, while the fifth, Anthony Mack Johnson, 37, was pronounced dead on the scene. The newspaper is reporting that Lavar Johnson "sustained a serious gunshot wound to his abdomen."

"Investigation has determined that the assailant, described as a black male in his late teens, possibly accompanied by another black male and a black female also in their late teens were walking south bound in the middle of the roadway in the 200 block of "T" Street. While walking past a residence, where a large group of people were holding a family reunion, the assailant suddenly brandished a semi-automatic handgun and began to indiscriminately discharge the weapon multiple times into the crowd striking all of the victims."


Johnson (12-3) made his Strikeforce debut in May at the first Strikeforce: Challengers event, defeating Carl Seumanutafa in 18 seconds via knockout. The victory marked his fifth in a row. It is unknown at this time whether his injuries are life or career-threatening. FanHouse will have more on this story as it develops.