Brock Lesnar, Frank Mir on Their Memories of Royce Gracie 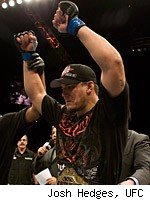 As they prepared to fight in the main event of UFC 100, Frank Mir and Brock Lesnar took a little time this week to heap praise on the first Ultimate Fighting Champion, Royce Gracie.

Mir said seeing Gracie win UFC 1 opened his eyes to a whole new style of fighting and made him want to become the Brazilian jiu jitsu black belt that he is today. And Lesnar fondly recalled seeing Gracie's battle with Kimo Leopoldo at UFC 3, which was Gracie's eighth UFC fight and the first time Gracie was ever seriously challenged in the Octagon.

"The memory that sticks out in my mind the most is Royce Gracie and Kimo, when Gracie pulled his pony tail out of his head," Lesnar said with a laugh. "That's one of the things that sticks out most in my mind, just watching two guys of different disciplines getting into the Octagon, and wondering which discipline would come out with his hand raised."

Mir said he's been watching the UFC from the very beginning.

"As far as early UFC memories, I think of the first UFC," Mir said. "At that time, I was under the same assumption that everybody else was, that if you punch somebody they go down. I never had any clue about grappling. I thought wrestling was just a sport in college and the Olympics, and I never realized that judo and jiu jitsu were very dominant martial arts. That was an eye-opening experience for me. I just sat there watching, completely dumbfounded by the whole situation."

Both Mir and Lesnar have a healthy amount of respect for the early days of the UFC, as I think everyone in and around the MMA world should. But I also think we should all acknowledge that MMA is a far, far better sport now than it was 15 years ago, and I think Lesnar was correct when he said that the sport has evolved to the point where the fighters of today leave the fighters of the 1990s in their dust.

"The UFC has come leaps and bounds since then, and both Frank and I are three times the athletes that Royce and Kimo could have ever dreamed of being," Lesnar said. "Royce only offered one thing, and that was his ground game. I think both Frank and I understand that we both need to evolve to achieve great success in this sport."