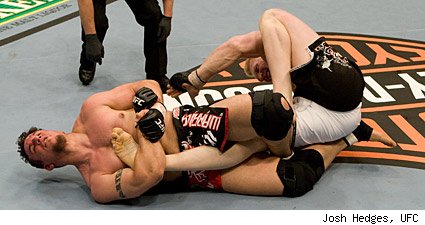 "His wrestling is the dominant area of his fighting skill set, and obviously his power, so I look to see that in the fight," Mir said when asked what he thinks Lesnar does well. "I don't think he can play the jiu jitsu game where he takes me down, passes my guard and looks for a submission, but he could take me down and look to establish a dominant position against the cage, raining down punches and using power to his greatest advantage."

That's what Lesnar was doing at the start of their first fight, until Lesnar hit Mir on the back of the head and the fight was stood up. Lesnar committing that foul allowed Mir to recover, and when the fight went back down on the ground again, Mir caught Lesnar in a knee bar and forced him to tap.

So while it only took Mir 90 seconds to beat Lesnar the first time around, a lot of MMA fans think the fact that Lesnar established the dominant position early on is a sign that Lesnar will beat Mir in the rematch. And Mir acknowledges that he has no hope of overpowering Lesnar.

"Trying to beat Brock at being strong, I'll need a few more years to catch him, if that's possible -- obviously, it's not," Mir said. "So I'll just look to find ways to use technique. I can't really go head-to-head. That's not the smartest game plan in the world, so I'm trying to use technique and movement to gain an advantage, with my agility and my movement."

I can't decide who I'm picking in this fight, and I think Mir more or less laid out why this is such a difficult fight to predict. Mir will never be as big, strong and powerful as Lesnar, while Lesnar will never have the jiu jitsu technique that Mir has spent years learning. The differences between them are the reason this fight is going to be so much fun.