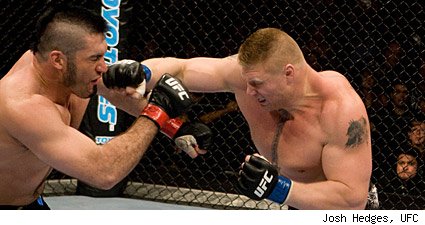 Frank Mir is getting ready to fight a 275-pound behemoth when he takes on Brock Lesnar for the heavyweight title at UFC 100. But Mir's biggest concern isn't Lesnar's weight. It's Lesnar's reach.

"I can point out why I think Brock has been successful at striking because we've actually had to address that in my training camp," Mir said on a call to promote UFC 100. "Brock's reach for his height is actually long. A lot of people don't realize that. They talk about his size, his power. Brock is almost 6-foot-4 ... his reach is actually really long. I remember even watching when he beat Randy, and he slipped that punch from Brock. He thought that he was out of the way, and that punch kept on coming, it kept on coming, and it kept on coming. And finally it just caught him and he went down."

Mir added that he had to find sparring partners who are taller than Lesnar so he could practice trading punches with someone who had the same arm length as Lesnar.

"I have two sparring partners that are 6-foot-7 and one who is even 6-foot-8 that we spar with," Mir said. "I had to find training partners that are three or four inches taller than Brock to even how long his arm reach is. Which, you know, if you watch boxing, that's the reason everyone sits there and goes, 'Well, what's his reach?' That's a very helpful tool in a fight -- how big the reach advantage is. Especially if you're throwing punches. The longer your arms are, the better it is."

When I asked Mir if there were any advantages to being the smaller fighter, he laughed.

"No, there's no advantage to being smaller," Mir said. "That's why we've got weight classes. If there was an advantage to being the smaller guy, weight classes would work the opposite way. It would have to be, 'Oh, that guy only weighs 150, you can't fight him. He'd murder you. You're 220.' Size can be an advantage, especially when you have fighters who are of comparable skill."

Mir pointed to the UFC 94 fight between lightweight champion BJ Penn and welterweight champion Georges St Pierre as a good example of the advantage that a bigger fighter has.

"We had two guys who know a lot about submissions and fighting and are both talented MMA fighters," Mir said of the UFC 94 main event. "But to me if I could point to one thing, it's like, 'Wow. There's a reason these guys are in different weight classes.'"

Mir did acknowledge that there are times when a fighter's size can be a detriment, but he said Lesnar is too good an athlete to have that concern.

"Being too big can be a disadvantage," Mir said. "That's why when you look at boxing, you don't see guys who weigh 300 pounds being successful. ... But in Brock's case he's naturally that big of a guy. He moves quick; he has great agility. ... If he was a big, cumbersome guy I might say he has to lose some weight. But the fact that he does move as well as he does, I don't think even his harshest critics are going to say he's not a quick, explosive athlete."

For all the trash talk that has gone back and forth between Mir and Lesnar, there's no question that the two of them respect each other a great deal -- and Mir especially respects Lesnar's size.