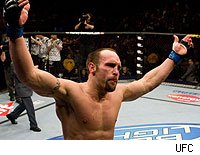 Shane Carwin and Cain Velasquez have verbally agreed to an Oct. 24 matchup and are likely to meet in the co-main event at UFC 104, sources close to the matchup confirmed to FanHouse.

Reports of the two fighting at UFC 103 appeared in recent days, but the UFC has apparently settled on the following event for the key heavyweight bout which may determine the next title challenger. No bout agreements have been signed, but little appears to stand in the way of the matchup.

Carwin and Velasquez are two of the organization's fastest-rising heavyweights and both boast unbeaten records.


Carwin upped his record to a perfect 11-0 with a first-round knockout of Gabriel Gonzaga in March. During the fight, however, he suffered a broken nose and needed time off to recover. He also holds knockout wins over UFC foes Neil Wain and Christian Wellisch. The 34-year-old has notably never been past the first round.

Velasquez, meanwhile, moved to 6-0 (4-0 in the UFC) with a three-round decision over contender Cheick Kongo during last month's UFC 99.

The main event of UFC 104, which will take place at the Staples Center in Los Angeles, is a light-heavyweight championship fight pitting new titleholder Lyoto Machida against Mauricio "Shogun" Rua.