Not So Fast, Tito 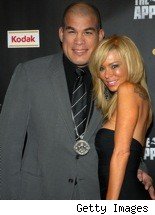 In a video interview we recently posted with Tito Ortiz shot this past weekend in Pittsburgh, "The Huntington Beach Bad Boy" said that he is set to start his own organization, Punishment Fighting Championships, in association with Strikeforce.

"I'm starting my own organization also with Strikeforce called "Punishment Fighting Championships," Ortiz said. "So, you know, just not as a promoter, I'll be competing also, and bringing some other guys around and trying to create superstars."

However, when Fanhouse contacted Strikeforce director of communications Mike Afromowitz Tuesday, he made it pretty clear that no agreement is in place with Ortiz.

"I don't know anything about it," Afromowitz said.

Afromowitz doesn't strike me as the kind of person who would say one thing publicly while something completely different was going on behind the scenes. When he said that this was the first time he had ever heard of Strikeforce working with Punishment Fighting Championships, I genuinely believed him.

So why did Ortiz say this? Well, unfortunately, since leaving the UFC in May 2008, Ortiz has said a lot of things. He once said that he was close to signing with Affliction; then EliteXC; now Strikeforce. The sad thing is that, if true, this would be pretty big news, however, the MMA blogosphere didn't really pick up on it. I suppose everybody's numb to Ortiz's proclamations at this point.

Ortiz is one of the very few fighters not under contract with the UFC that can actually sell pay-per-views or spike ratings on his own. But until he is ready to resume his fighting career, I wish he would just keep his grandiose future plans for himself. I mean, we all know he's going to re-sign with the UFC anyways, right?