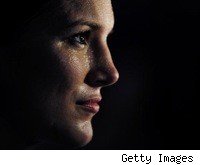 Strikeforce announced Wednesday that they will be holding a press conference at the WaMu Theatre inside New York City's Madison Square Garden on July 14 to hype the August 15 fight between Gina Carano and Cristiane Santos. The event is also open to the public.

Call me crazy, but I think that this is a historic moment for Strikeforce, mixed martial arts and, more specifically, women's MMA.

Think about it: did you ever think that a promotion not named the UFC would hold a press conference at MSG with the main participants being two female fighters? I sure didn't.

It should be noted that the UFC could probably hold a similar event at the WaMu Theatre if they wanted to. They once held a UFC 79 viewing party inside MSG, and have scheduled another one at Radio City Music Hall hosted by Frankie Edgar and Matt Hamill for UFC 100.

However, I'm pleasantly surprised to see Strikeforce take this major plunge into the New York City market while doing everything in their power to promote this mega-fight. Now I'm curious as to what kind of media turnout it will generate. One can probably hold a press conference anywhere, but if it isn't attended by any significant media outlets, it's probably not worth the effort.

Don't get me wrong, this isn't anywhere near as significant as actually promoting an MMA event at MSG. Of course, that can't happen just yet since the sport isn't regulated in New York state (whenever you're ready, guys). But kudos to Strikeforce for doing the next best thing by bringing two of its biggest stars to "The Mecca" to help bring a little more attention to their upstart promotion.