Will Tito Ortiz Return to the UFC? 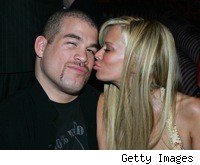 When Tito Ortiz lost to Lyoto Machida at UFC 84, many suspected that it would be the last time "The Huntington Beach Bad Boy" would ever fight inside the Octagon. Considering his long-standing feud with UFC president Dana White, it seemed unlikely that the two sides would ever work with each other again.

Or so we thought.

At the UFC 99 question-and-answer session Friday in Cologne, Germany, White appeared to subtly reopen the door for a possible Ortiz return in the future.

"I loved seeing him getting his ass whooped by Machida," White said. "I actually contemplate bringing Tito back just to see him getting beat up again."

White probably wants us to think that he is joking, but you know what they say: there is some truth behind every joke. I believe that deep down White still thinks he can make money by promoting Ortiz fights, and he is smart enough to put aside any personal grudges to do so. White's recent signing of Kimbo Slice to appear on the upcoming season of "The Ultimate Fighter" is a perfect example of this. And remember, if White really didn't want to have Ortiz back in the UFC, he would just say so.

When I spoke to Ortiz in April (video interview below), he said that his UFC contract officially expires this month. He also mentioned that he wants to fight twice in 2009, with "late August" being his target date. He had extensive back surgery late last year.

Ortiz seemed open to negotiating a new contract with the UFC, but then quickly said it was "high doubtful."

"Unless Dana loses his job, that's probably the only chance that may happen," Ortiz said with a smile.

My guess is that if Ortiz does in fact return to active competition, we have a much better chance of seeing him fight again for the UFC by the end of 2009 rather than competing for Strikeforce, Affliction or any other organization.