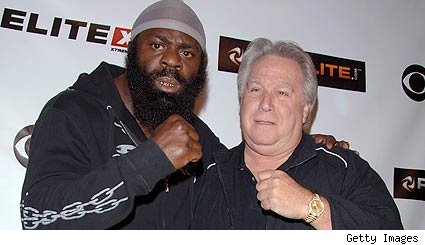 A year ago, Gary Shaw was promoting Kimbo Slice as the next big thing in mixed martial arts, while UFC President Dana White was mocking Kimbo as a street fighter with no athletic skill. What a difference a year makes.

Now White has given Kimbo a spot on The Ultimate Fighter, and Shaw told FanHouse Tuesday that he's shocked and disappointed, because Shaw was hoping to promote Kimbo as a boxer. But Shaw also said that he considers Kimbo a friend, and that he gives White credit for making a smart business move by hiring a fighter who, in Shaw's words, has the it factor. The full interview is below.

Michael David Smith: What's your reaction to Kimbo going on The Ultimate Fighter?
Gary Shaw: It shocked me when I heard, especially after Dana dissing him for two years and saying the nastiest things about him. So it surprised me, knowing who Kimbo is, that he would succumb to working with Dana. It shows that whatever comes out of Dana's mouth is not always the truth.

Are you disappointed on a personal level? You put a lot into promoting and marketing Kimbo.
Sure. I just don't think it's a big enough platform for him. I think it's a step back. I think he's bigger than that.

Do you consider Kimbo a friend?
Absolutely.

Are you angry with him?
No. No. Not at all. Not at all. Whatever Kimbo wants to do, I'm happy for him. I don't know what they paid Kimbo -- maybe they paid him a boatload of money -- and in that case he's doing the right thing. Kimbo is one of those people that comes along every once in ages who has what I call the it factor as a promoter. I have a lot of fighters who come to me and are great talents but don't have the it factor. And then you have someone who comes along and has the it factor. Manny Pacquiao has the it factor. He's a star. He reeks of stardom. People gravitate to him. Kimbo is that way. When he walks into a room, he lights up the room. People yell "Kimbo! Kimbo!" It doesn't have anything to do with how he did in his last fight. It has to do with the it factor. When Tyson walks into an arena, everyone stands up. He's Mike Tyson, of course, but he's got that it factor. When you're at a basketball game and they show Jack Nicholson on the big screen, the place erupts. He has that it factor. And then they might show someone else who's also a great actor, but he'll just get a little hand. It's that special it factor that people have, even if they're not the greatest athletes in their sport.

So if Kimbo has that it factor, wasn't it smart of Dana White to sign him for The Ultimate Fighter?
For sure. I give Dana credit. I'm not anti-Dana or anti-UFC or anti-MMA. I give him credit. He did the right thing. I would have done it a little differently: I would have said, early on, "Kimbo is an asset and I'd love to have Kimbo." I don't see that as a sign of weakness. I would say that in boxing, if you ask me what I think of Manny Pacquaio, I'd say, "I hope some day he'll fight for me."

Are you disappointed that Kimbo won't be boxing?
Yes. Because I really believe that I could make him the heavyweight champ.

How do you think he'll do on The Ultimate Fighter?
I hope he does well.

And you think he has real athletic potential in addition to the it factor?
Oh, yeah. He's an athlete. If I had a football team -- I'm not talking about the NFL, he's too old for that -- but if I had a football team he's one of the first guys I'd want to pick for a linebacker. He's an athlete and he's a star. He's got the whole package, and that's why I'm disappointed I won't get to put him in the boxing ring. I think if I had hooked him up with a great strength and conditioning coach and a great boxing trainer, he would have woken up the heavyweight division. At first everyone would have said he's old and he can't box, but after five or six wins, that would have changed. And he could have filled a void. Right now in boxing, the heavyweight division is a void.

Do you think Kimbo is 100% committed to the UFC now?
I don't know factually, but from what I hear I think so.

And what about you? Are you 100% committed to boxing, or might we see you back in the MMA world?
If the right MMA promotion came along or the right MMA fighters, I might promote an MMA fight. The fact that the company that I ran the mixed martial arts card for folded, that to me still hurts, personally, because I believe they made so many wrong moves. But right now I'm 100% in boxing and I have a lot of fighters that I represent, a lot of world champions and quite a few who are on the cusp of a world title.