Urijah Faber: I'm Going to Be the World Champion Again at 145 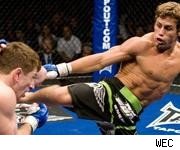 Urijah Faber desperately wants to be the best featherweight in MMA again.

Faber, who was the World Extreme Cagefighting champion at 145 pounds until his shocking first-round TKO loss to Mike Brown in November, told me this week that preparing for his June 7 rematch with Brown at WEC 41 has consumed him, and that he's ready to take the belt back. The full interview is below.

Michael David Smith: When you look back on your first fight with Mike, what do you think you did wrong?
Urijah Faber: I know what I did wrong: I just basically got caught in a bad position. I tried to do an elbow, got caught with a big punch and you know the rest. The biggest thing was just making a mistake. I thought I was fighting pretty well before that and then I made a mistake.

Frank Mir said he thought that spinning back elbow you tried was an indication that you were taking Mike lightly. Do you think there's some truth in that?
No. I don't really think too much during my fights, so it's not like I was thinking, "Oh, Mike Brown's not too tough, I'll just throw a back elbow." It was more like I just bounced off the cage, I could see Mike out of the corner of my eye coming toward me, and I tried a sneak attack and just got caught.

Are you in better shape going into this fight than you were going into the last one?
Training is a lifestyle for me, so I'm always in good shape. I don't ever recall being in a fight when I wasn't in good shape. One thing I have done is put on a few solid pounds of muscle through doing some lifts, to build up my legs. I feel good, man. I'm ready to rock.

What kind of lifting are you doing to build up your legs? Squats and deadlifts?
Yeah, and some creative moves that are designed to build up explosive power, like dumbbell snatches and Olympic-style lifts, which I've never done before.

Just looking at your two body types, do you feel like no matter how much lifting you do, Mike is always going to have a size and strength advantage over you?
I don't think a strength advantage, necessarily. He's definitely a bigger guy walking around. I've heard he gets up around 165-plus, and the highest I ever am, when I'm stuffed, is 160, and usually even if I'm stuffed it's more like 158. But I've never had a problem with strength and I don't think I'll have that problem with Mike. In our first fight, in the clinch I felt stronger than him. I landed a couple good knees. One knee I landed at the same time as he pushed me, and people think he threw me around but in reality I landed a solid knee. I don't feel like he's stronger than me by any means.

I tend to think of that fight in terms of Mike beating you very quickly, but from hearing you talk about it, it sounds like you think you did some things well and that you learned some things that make you pretty confident heading into the rematch. Is that true?
Yeah, definitely. The plan was to be elusive and faster, and make him chase me a little bit, and that's what I was doing, except that I got caught with a big punch. I spun toward him and basically clotheslined myself on that punch.

At the same time, though, since he did beat you, and you said he's a bigger guy than you, do you think that if he beats you again, your best chance to get a belt again after that would be to drop 10 pounds and move down to bantamweight?
Well, I've thought about that for a long time anyway, not necessarily to stay down there, but at least to go down there and try it, not for any reason other than it would be fairly easy for me to cut that weight. But I don't think about that right now. I just think about winning. I'm going to be the world champion again at 145.

If you do become the world champion again at 145, where does that put you in the pound-for-pound rankings?
Oh, I don't know. It's hard to say on that stuff because that's just stuff for fans and critics. I'm just looking to keep improving and keep winning my fights.

Even if you don't think about pound-for-pound rankings, do you think about which other fighters you personally enjoy watching the most?
I love watching other guys fight. One of the guys I've always said was one of my favorite fighters to watch was Sakuraba. He's always been really creative, he's got a great attitude, and I think he has the right approach of just going in there and letting it all hang out.

Are there any moves you saw Sakuraba do that you tried to emulate yourself?
Not really any one specific move as much as just trying to be creative in general. I've seen him do a jumping double hammer fist. I've seen him try to pull the gi over his opponent's head. I just like his overall demeanor and the way he fights.

How much longer do you think you'll fight, and are you already positioning yourself to have a career as a coach and trainer after you retire?
I'm definitely not thinking about stopping fighting. I've got a lot of years left in this sport. But, of course, I'm always looking for other ways to generate revenue. I think it's just natural for me to have other things going other than just fighting, but I'm not looking to quit any time soon.

Is there anyone you're hoping to fight who you haven't fought yet?
Whoever the fans want to see and whoever's ranked No. 1. I'm just looking to fight the best and establish myself as the best.