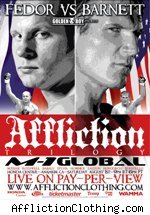 After months of speculation, Affliction has finally shown its cards.

The appearance of the event poster is significant because Affliction President Tom Atencio told FanHouse last week that the company would not make any public announcement of the event until contracts were written in ink.

The poster, therefore suggests that the ink is dry on the important elements of the deal, though an official announcement has yet to be made. That will likely come when Emelianenko comes to the U.S. on a press tour in the first week of June.

Curiously absent from the list is Vitor Belfort, who had been expected to face Mousasi. His omission suggests that perhaps he was not willing to meet Mousasi at a catchweight.

Affliction: Trilogy will emanate from the Honda Center in Anaheim, Calif., and air on pay-per-view.