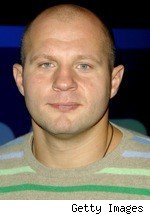 Affliction announced via their Web site on Friday morning that their third event, "Afflction: Trilogy," will take place on August 1 at the Honda Center in Anaheim, headlined by Fedor Emelianenko vs. Josh Barnett.

Affliction COO Michael D. Cohen contacted FanHouse on Friday afternoon to share additional information about the third show. In addition to confirming that Emelianenko and Barnett will fight on the third Affliction show, Cohen mentioned that the organization will hold a press conference this Wednesday, June 3, at the Trump Tower in New York City to officially announce the event. Scheduled to be present at the press conference are Fedor Emelianenko, Josh Barnett, Tom Atencio, Donald Trump, Mark Cuban, Donald Trump Jr. and representatives from Golden Boy Promotions.

The full interview with Cohen is below.

Ariel Helwani: This event is called "Trilogy." Does that mean it will be the final MMA show for Affliction?
Michael D. Cohen: Trilogy just means that this is the third. This is the third of the series.

So, Affliction Entertainment will not stop promoting more MMA shows after August 1?
Absolutely not. What it should indicate to people is that this is just the third event that Affliction will be promoting, and I can assure you that there will be a fourth; a fifth; and a sixth.

Why did you decide to go back to Anaheim for the third straight time?
You know, that's an interesting question. It was a significant debate amongst the members of the board of Affliction whether to go to a different venue or to stay at the venue which we have hosted the last two events. If you look historically, the last two events were sell-outs of over 16,000 fans for each of the events. The fan base in California and in that surrounding area is so enormous that the decision was to stay in that locale. The fourth one will most probably be on the East Coast.

Are you afraid that by going to Anaheim for a third straight time that you might be drying out that market?
To the contrary, what we found is that the fan base was so enormous there and they're so loyal because the Affliction events have been so fantastic, that the buzz on the street is incredible.

What would you like to be done differently this time around?
I think that with each event we're certainly getting better and we're making changes that have made the event quicker and more interesting for the fans. As you may recall, for the first event we had live music. While many people truly appreciated Megadeth as musicians, it probably was not the right venue for an MMA event. So, that was cut out. The second event we think went very, very well. We thought that the production was very good. Not to the level of excellent yet, but it was very, very good. Our focus is on the production and making the production excellent.

Will the undercard air on HDNet and the main card on pay-per-view just like "Affliction: Day of Reckoning"?
Yes.

Mark Cuban and Donald Trump seem to have had some issues in the past. How well do they work together?
They work just fine together. There is absolutely no issue between Donald Trump and Mark Cuban. You know, it's funny – two guys can have words and technically it's over. But when it comes to Donald Trump, the press just loves to make much more out of it than what it is. It's not even a real question.

I think a lot of people are curious as to what your specific role is with Affliction Entertainment. How much time do you devote each day to MMA?
Tom Atencio is really the guy who's responsible for the bulk of the work as it relates to the promotion of this event. As the chief operating officer, I am always available for questions, concerns, input as it relates to insuring that the Trump involvement remains strong; that the fight card remains impressive; that the company moves into a positive direction. So, my involvement is really on a as needed basis. Now it will certainly be much more than it was, say, three weeks ago or a month ago when the fight card was being contemplated by Tom. Now that it is set up and Mr. Trump will be announcing it this Wednesday at 11 o'clock at Trump Tower, my involvement will be greater.

Why do you think there are always so many rumors circulating about the demise of Affliction?
You know, it's interesting, Ariel. This is the not the first time I have heard these rumors. These rumors existed even as Affliction was doing the first event, "Affliction: Banned." And we're coming close to a year and three months, and yet the fight cards seem to be getting better; the production certainly has gotten better; the name recognition of Affliction has certainly increased astronomically. So again, these are just rumors by the same people who have been making these statements for the better part of 14, 15 months already.

Who do you think is starting these rumors?
Well, I would probably have to say some of these smaller MMA (Web) sites, believing that it will probably drive some attention to their site. There is no accuracy to the statements that they make. Affliction is a company that has shown its resilience and has done very well even during these rough economic times.

Are you confident that this third event will be the first Affliction show to turn a profit?
Oh, absolutely.

Will the payroll be less than the first two shows?
Yes.

Considerably less?
It will be less.