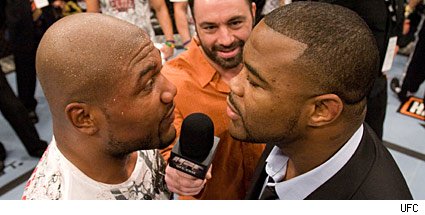 After weeks of speculation, the UFC announced Thursday that Rashad Evans and Quinton "Rampage" Jackson would be opposing coaches on season 10 of The Ultimate Fighter.

Production of the show is expected to start in the first week of June.

Interestingly, the original press release announcing the decision made no mention of whether Jackson and Evans would square off at the conclusion of the show as has been the custom in the last several seasons. The omission was apparently accidental, as during a conference call, Jackson confirmed that he was given his choice and picked Evans.

"They told me I could fight whoever and I had my mind set I would fight Evans," Jackson said, adding that he was rooting for Evans last weekend in hopes of fighting him for the title.

Evans and Jackson were previously expected to meet after Jackson defeated Evans' teammate Keith Jardine at UFC 96. In fact, the two went nose-to-nose in the middle of the octagon in the moments after Jackson's win in an effort to build the hype. But because of scheduling issues, Lyoto Machida was moved ahead in the pecking order and got a crack at Evans at last Saturday's UFC 98. As we know, Machida knocked out Evans, handing him his first loss.

But Evans will go right back into the deep end of the pool against the former champ Jackson. The two will be coaching heavyweights during their season on TUF.

"Rashad's ass is grass and I'm the lawnmower," Jackson said. "He's gonna get his ass whooped no matter what."

Meanwhile, UFC President Dana White is working on Machida's first title defense, and hopes to have a fight announcement in the next few days. All signs point to Mauricio "Shogun" Rua, as nearly every other top light-heavyweight or possible contender has a scheduled fight in the next few months, including Forrest Griffin, Rich Franklin, Randy Couture, and of course, Evans and Jackson.

Rua, meanwhile, is coming off a first-round knockout of Chuck Liddell and has an open schedule. In addition, he recently was in Las Vegas meeting with White.

Either way, we should know soon. When asked who Machida would fight, White said, "We're working on it right now. I don't like to announce anything until it's signed, so as soon as it's signed I'll announce it. Which I hope will be today or tomorrow."