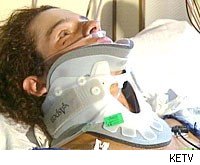 Iowa mixed martial artist Zach Kirk was badly injured during a fight last Saturday night, suffering a broken neck and paralysis after landing head-first on the mat during a takedown attempt.

"I knew I couldn't feel nothing," Kirk told KETV from his hospital bed. "I was just scared -- scared from right there."

According to local news reports, the 20-year-old Kirk has some use of his arms after doctors replaced his fifth vertebrae with bone from his hip during a recent surgery. Doctors are unsure if he'll ever be able to walk again.

Kirk was 2-0 heading into a matchup at the Mayhem Martial Arts show in Shenandoah, Iowa, but the injury happened in the opening seconds of the bout as Kirk went for a takedown. His opponent tied up Kirk's arm in an attempt to stop it, but instead they crashed to the canvas with Kirk's head taking the brunt of the blow. His body immediately went limp, and the fight was stopped seconds later.

As we've seen in the past in the MMA world, the fight community is making an effort to come together and support him. A benefit show is being planned, with information here, while donations for his care can also be sent to the Kirk family directly via Paypal at rkirk77@hotmail.com.

Kirk and his family hold no ill will to the sport, telling KETV, "It's a real safe sport. You've just got to watch what you're doing."