Dennis Siver Discusses 'Perfect Storm' in Germany and Its Impact on UFC, MMA 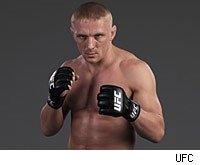 Ever since the UFC announced that they were holding their first-ever event in Germany earlier this year, the local media has tried to do everything in its power to throw road blocks in their way.

In March, Dana White held a press conference in Cologne, Germany, site of UFC 99 on June 13, to officially announce the event, and mentioned on a video blog that the press was very negative towards MMA. And last week, the UFC was forced to ban anyone under the age of 18 from attending the event after a popular German newspaper called the sport "brutal cage fighting" and receiving pressure from a local child protection commission.

FanHouse spoke to German-born fighter Dennis Siver, who is competing on the card against Dale Hartt, through translator Oliver Copp about the backlash against MMA in his home country. The full interview is below.

Ariel Helwani: What was your initial reaction when you heard that no one under the age of 18 would be allowed to attend UFC 99?
Dennis Siver: When I heard about it, I was very surprised, but also very concerned about the event. So, if having the 18 and under rule helps save the event, and allows the UFC to stage the event, then I am all for it, even though I consider it completely unnecessary.

Is this a case of a bunch old German boxing promoters trying to keep MMA out of the country or some other political issue?
There are actually two components to this: one is the boxing side. I do think that there is a political agenda, too. People from boxing are trying to keep the UFC out, because every time MMA and UFC are mentioned in Germany they kind of try to downplay it and make it look bad. The other side is that the general political situation is one where the sport itself is being brought into question by the authorities. (They say) it's unsuitable for children, brutal ... So, it's those two components, and those two add up to a perfect storm.

Do you think this will be the last time the UFC holds an event in Germany for a while?
If the event goes by and there aren't any major injuries, I am pretty certain that they will be back. I think that people seeing the sport as it is -- not as they are perceiving it -- is going to help the entire sport, it's image, and the next event is going to be a lot less problematic than this one, because right now, people are kind of afraid of things because they don't know when they think they know. When you have an event and there aren't any major injuries and everything goes well, you really have a totally different base.

How do people react in Germany when you tell them that you are a UFC fighter?
There's really two different ways they look at it: some people think it's the worst thing you can do and you're an idiot if you fight in MMA. Other people accept it. But we definitely have to do a lot of explaining. At the end of the day, it's still like 50-50 between the two groups. People don't know the sport (and) they are technically always negative towards it. But the more people find out about the sport, the less problems we are going to have just from people not being educated about it. So, this is a process which is going to take time, but eventually it's going to go away.

Do you feel any more pressure fighting for the UFC in your home country, especially under these circumstances?
There is a bit more pressure than usual because I know everybody is going to be watching me. My friends, my families - everybody is going to be there. But that the end of the day, it's another fight for me, and I am just going to have to perform. That's what I plan on doing.