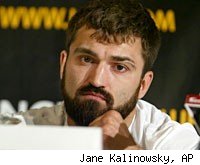 Andrei Arlovski fell into the June 6 Strikeforce card only after champion Alistair Overeem was forced to pull out of a proposed title fight with Brett Rogers due to a hand infection, and apparently, Arlovski's stay with the San Jose, Calif.,-based organization could extend past one fight.

According to Strikeforce director of communications Mike Afromowitz, the winner of the Arlovski-Rogers bout could be next in line for a crack at Overeem's belt.

Afromowitz, however, did caution any excitement, noting that a winner vs. Overeem fight was no certainty because of the many factors in play, including Overeem's recovery time, Arlovski's contract situation and the ever-present possibility of fight-sustained injuries hurting the timeline.

"There's a lot of moving parts there," he said during a conference call promoting the June 6 Strikeforce: Lawler vs. Shields event.. "Depending on the winner, it's a possibility. We have to revisit where Andrei is at with his contract. And if Brett wins, if he's healthy it's a possibility. We'll see what happens, but yeah, either fighter could easily challenge Alistair for the title."

The 29-year-old Overeem won the belt in November 2007 but since then the belt has collected dust as he has competed exclusively overseas. After fighting four times in '08, Overeem has yet to make his '09 debut. He seemed set to defend the belt against Rogers, but reportedly injured his hand in a bar brawl with his brother (pro fighter Valentijn Overeem) and several bouncers, and was unavailable for the June 6 date.

Rogers was not amused at the missed opportunity.

"I did have my mind set on that belt. I was kind of concentrating on that, so whenever he heals, I'm going to go for that," he said.

Perhaps more intriguing is the possibility that ex-UFC champion Arlovski could fight for the Strikeforce title. Though officially signed to Affliction, the organization has co-promoted him through EliteXC and now Strikeforce. Neither Arlovski or his management would comment on his Affliction deal and if a Strikeforce title fight would be possible.

"Andrei appreciates the opportunities he has, but we consider contract information to be proprietary information of the promotions," Arlovski's manager Leo Khorolinsky told FanHouse.com.

Meanwhile, Strikeforce expects Overeem to return by mid-summer. With Arlovski and Rogers fighting in early June, the winner might require a quick turnaround to get in the cage with Overeem before summer shifts to fall.