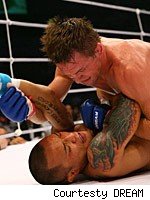 Kid Yamamoto, one of the best and most popular Japanese MMA fighters ever, returned to the ring after a layoff of more than a year and lost in a shocking upset to the American Greco-Roman wrestler Joe Warren Tuesday at Dream 9 in Yokohama, Japan.

The victory moves Warren into the semifinals of Dream's featherweight tournament, and it must have Yamamoto wondering what's next in his career.

Although Yamamoto showed off some of his always impressive stand-up skills, he wasn't able to hurt Warren with his hands or his feet, and Warren simply overpowered him when they clinched or went to the ground. At age 32 and coming off a major knee injury, Yamamoto's best days may be behind him.

Warren, who improved his record to 2-0, is actually a few months older than Yamamoto, but his best days in MMA are clearly ahead of him. Warren was a Greco-Roman world champion who might have been an Olympic gold medalist in Beijing if he hadn't been banned for using marijuana, and now he's using that wrestling base to turn himself into a very good MMA fighter. I look forward to seeing what he does next.