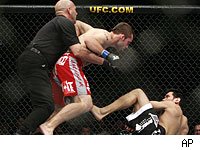 It hasn't been a good 2009 for Yves Lavigne, and it got worse on Saturday night at UFC 98. Lavigne, one of the best-known referees in mixed martial arts, was loudly booed at the MGM Grand Saturday night because he brought the undercard bout between Phillipe Nover and Kyle Bradley to what many in attendance thought was a premature ending.

Lavigne stopped the fight when Bradley hit Nover on the ground and Nover went limp for an instant, but by the time Lavigne jumped in, Nover was alert and ready to defend himself intelligently. It was a close call, and after watching multiple replays (available at UFC.com) I'm still not sure whether it was a good stoppage or a bad one. I've asked a few of my fellow MMA journalists what they think, and the opinion is basically split: Some say it was a terrible call, while others say Lavigne did the right thing to protect Nover.

But while that stoppage is the one that got Lavigne booed, I think Lavigne made a bigger mistake a few hours later, looking indecisive and hesitant when Drew McFedries knocked Xavier Foupa-Pokam senseless. Lavigne stopped the fight and gave McFedries the TKO win just 37 seconds into the contest, but he should have stopped it even sooner, as McFedries had Foupa-Pokam reeling in the opening moments. Foupa-Pokam took more damage than he should have because Lavigne didn't want to stop the fight too quickly. He looked gun shy.

Lavigne was also the ref who badly botched the Pete Sell-Matt Brown fight at UFC 96, so he's already been hearing quite a bit of criticism this year, and I wasn't too crazy about the way he handled the main event at UFC 97, either. A few months ago Lavigne was considered one of the sport's best referees, but it seems that with each passing UFC show, Lavigne's reputation takes another hit.