Even in Losing to Hughes, Matt Serra Proves He's No Fluke 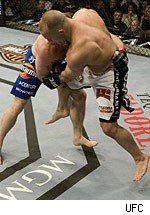 First thing's first. Matt Serra was not robbed at UFC 98. Neither though, did he lose. After two years of back and forth, after injuries delayed their original fight, and after 15 minutes in the octagon, the two Matts were fit to be tied, and their match should have been ruled a draw.

The judges, however, saw things differently. After three rounds, they gave Matt Hughes a 29-28 across-the-board win. They no doubt gave Serra the first round, and Hughes the final two.

The fight was close enough that neither fighter was quite sure whose name ring announcer Bruce Buffer would call.

"I thought I had it, but I'm sure Matt thought the same thing," Hughes said in the post-fight press conference at the MGM Grand Garden Arena.

"I thought I squeezed out the third. It was close, but what are you gonna do?" Serra added.

No matter what the judges decided - and make no mistake, judging close rounds in real time is not easy - Serra should forever have the "one-hit wonder" tag that some affixed to him removed. Hughes is an all-time great, came into the fight motivated and in fantastic shape, and was fortunate to make it out in a conscious state, let alone with a win.

The first two rounds were somewhat easy to score. In the first, Serra hurt Hughes badly, had him on wobbly legs and looked on the verge of finishing him before Hughes rebounded. In the second, Hughes scored a takedown a minute into the round and kept Serra on the ground for most of the rest of the frame, landing strikes from time to time.

But then came the pivotal third, which all three judges scored for Hughes.

It is safe to assume they gave him the round on the strength of his takedown as well as keeping Serra on his back for two minutes and 18 seconds. But a closer look at the action shows that Hughes did virtually no damage, and in fact, Serra was the more active and effective fighter during that time.

In that 138-second span, Hughes threw only 10 shots to the body and one to the head, and all of those punches came when Serra had one of his arms trapped in an omoplata. In fact, Hughes was delivering the punches while trying to escape Serra. Despite fighting from the top, Hughes' shots were defensive rather than offensive. They were reactionary, designed to pull himself from an uncomfortable situation he was not in control of.

During their time on the ground, Serra used two omoplatas to stifle Hughes offensively, and also tried a triangle, while Hughes didn't land a single meaningful strike. Serra did such an effective job neutralizing Hughes that referee Steve Mazzagatti stood the fighters up with 1:45 left. Upon the restart, Serra took Hughes to the mat with a trip takedown and then landed at least two power strikes from the top before time ran out.

The UFC counts effective striking, grappling, aggression and octagon control as its scoring criteria, but one could argue that in fact Serra was controlling most of the ground action with omoplatas, while Hughes was unable to inflict any damage at all. In essence, Hughes' offensive output for the final round was one single takedown. Still, the judges gave the round to him.

"I thought I got the third round," Serra said. "I got the foot sweep, I got on top, landed some shots. I thought I squeezed it out. But I have no regrets."

Given the longstanding rivalry, Serra had the right to be upset with the decision, but he knows there is more to it than that. Regardless of the official decision, he gets to leave Las Vegas behind knowing he earned the respect of Hughes, who was just a few years ago the most dominant champion in the UFC.

After the fight, the two hugged, shared a word about squashing their feud, and Hughes went so far as to raise Serra's arm in the air.

Hughes immediately said he plans to continue fighting. Though the Serra fight was the last on his UFC contract, he is unlikely to fight anywhere else. Serra, though, did not seem quite as sure.

"Let me just absorb this and spend time with my family," he said. "I just had a three-month old. She's been with my family and I've been away from [my family] training for this, so I need to get back to them, chill a bit and weigh my options."

For their efforts, the Matts won the "Fight of the Night" award, which carried with it a $60,000 bonus. But more so than money, Serra gets to leave the ring knowing that all those people who thought his win over Georges St. Pierre was a fluke left with something new to think about.

Matt Serra fought one of the sport's all-time great to a stalemate, even if the judges didn't quite see it that way.