Underdog Rashad Evans Bets on Himself At UFC 98 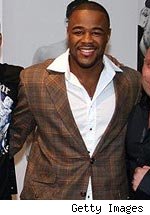 In most sports, an athlete betting money on his own competition would be a major no-no. But in boxing and mixed martial arts, it's considered completely acceptable for a fighter to put money on himself.

And that's what UFC light heavyweight champion Rashad Evans has done. Evans, in Las Vegas to fight Lyoto Machida Saturday night at UFC 98, says that he stopped by a casino and put down some money -- he won't say how much -- on himself to win the fight.

"I'm coming into this fight still the underdog. Every time I fight, people pick against me. ...

"Most of (Machida's) fights, I've seen something I can use for myself. He doesn't get hit much, but he does have holes."