Hieron vs. Daley Booked for Affliction 3 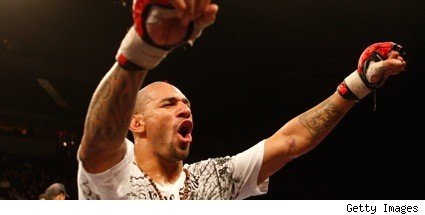 While not yet officially announced, Affliction's third MMA event is quickly taking shape.

FanHouse has learned that a welterweight bout between Jay Hieron and Paul Daley has been signed for the organization's upcoming show on August 1. FanHouse reported earlier this week that Fedor Emelianenko and Josh Barnett have verbally agreed to headline the event.

Hieron, a veteran of the IFL and the UFC, has won his last five fights in a row, most recently scoring an impressive first round knockout of Jason High at "Affliction: Day of Reckoning" in January. Earlier this week, Hieron told MMAJunkie.com that he agreed to a bout against Nick Diaz at the upcoming Strikeforce event on June 6, but the fight never came to fruition.

Daley, once considered a rising star in the welterweight division, has struggled as of late. He's fought five times in the last seven months, and won his last two in a row, but lost high-profile bouts to Jake Shields and Nick Thompson. Against Shields at EliteXC's final show in October, Daley was over-matched on the ground and proved he was not quite ready to hang with the best at 170-pound fighters in the world.

On August 1, the British fighter has a chance to prove his doubters wrong when he faces Hieron, considered by some to be one the most underrated welterweight fighters in the world.

The promotion has yet to confirm its third event, rumored to be held at the Honda Center in Anaheim, Calif., but it now appears safe to assume that it will finally take place after months of speculation.