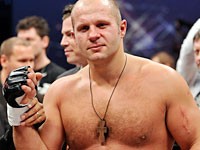 Affliction's third event, featuring a main event of Fedor Emelianenko vs. Josh Barnett and taking place at the Honda Center in Anaheim, Calif., on Aug. 1, should be officially announced within days, a source with knowledge of the situation told FanHouse.

Though neither Emelianenko or Barnett has signed official bout agreements, they have both verbally accepted the matchup, according to the source.

Earlier this week, Affliction President Tom Atencio told FanHouse he would not be able to confirm any details until contracts were officially signed.


The event will air on pay-per-view.

While Emelianenko-Barnett had long been rumored, another source inside Affliction told FanHouse that the organization at least briefly considered a rematch between Emelianenko and Andrei Arlovski (the two squared off in January with Emelianenko winning by first-round KO). Arlovski, however, was recently announced for a June 6 Strikeforce fight with Brett Rogers.

Emelianenko is considered by many to be the top heavyweight in the world, and boasts a 30-1 career record with one no contest. He has not lost a bout since Dec. 2000, and holds wins over ex-UFC champs Tim Sylvia and Arlovski, and heavyweight great Antonio Rodrigo Nogueira, among others.

Barnett, 24-5 and a former UFC champion, most recently defeated Gilbert Yvel by submission due to strikes at Affliction 2 in January. He and Emelianenko are longtime friends, but will put their relationship aside for one night.

Emelianenko is expected to go on a U.S. promotional tour in early June before beginning his training camp.

The August 1 show will also likely feature a bout between Brazilian slugger Vitor Belfort and surging star Gegard Mousasi, according to the source, though Mousasi first has a May 26 DREAM fight with Mark Hunt in Japan. Interestingly, for a time, Emelianenko-Barnett and Belfort-Mousasi were both rumored as possibilities at Affliction 2 before the organization changed course.

Meanwhile, Sylvia will likely take on either Paul Buentello or Yvel.