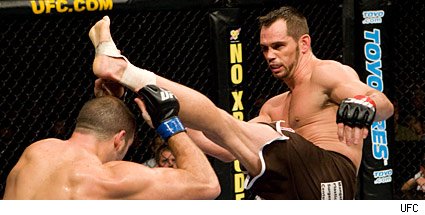 The UFC is coming to Cologne, Germany's Lanxess Arena on June 13, but apparently not all of the locals are too thrilled about it.

The German newspaper Bild on Monday ran a story with the headline, "Calls to ban the 'insanity' of brutal cage fighting in Germany." Not surprisingly, it was filled with inaccuracies and hyperbolic quotes from talking heads.

This might not sound like a big deal but consider this: with a circulation of over 3 million daily, Bild is one of the largest newspapers in the world. (By comparison, The New York Times' circulation is just over 1 million daily.)

The story notes that there is an active movement against the sport in Germany, with the Cologne city council issuing a statement saying it did not approve of cage fighting, the host arena voicing a desire to implement an age restriction on the event, and a boxing expert who apparently forgot his sport's history when he said, "We must ban this insanity. People could die."

Also included in the story is your standard mainstream media botching of facts near the top of the story to plant fear in the minds of the masses:

Anything goes in the UFC, which has similar rules to the brawling in hit film 'Fight Club' - stamping, punching, choking and throwing are allowed, only biting and eye-gouging is forbidden.

I'm not sure what "stamping" is in relation to MMA, but it doesn't sound too dangerous. To say "anything goes" is obviously ridiculously off the mark. It literally takes 10 seconds on an internet search to find out that they only missed 29 of the 31 fouls involved in the sport.

If you need a quick reminder on why it's been so difficult for mixed martial arts to get sanctioned in states like New York and Massachusetts, stories like this are all the evidence you need. These are often the types of articles that legislators who don't have time to scour alternative news sources read. Each time UFC goes into a market, they do their best to try and educate people, but it remains an ongoing battle.

The UFC 99 card at Lanxess Arena has a main event of Rich Franklin vs. Wanderlei Silva.