'JZ' Looks to Make Up for Lost Time 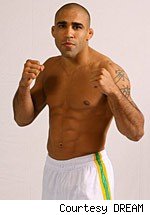 This past year has been one to forget for Gesias Cavalcante. Once considered one of the best lightweight fighters in the world, "JZ" hasn't competed since losing to Shinya Aoki last April at DREAM.2 in Saitama, Japan. After taking some time off to get healthy, his next two fights were either canceled or postponed.

On May 26, he finally returns to action against veteran Tatsuya Kawajiri at DREAM.9, with the American Top Team member looking to prove that he is as relevant as ever in the 155-pound division. Looming on the horizon is a chance to avenge losses to current DREAM lightweight champion Joachim Hansen or Aoki, and that alone is enough to fuel the Brazilian fighter.

FanHouse spoke to JZ about his time away from MMA and sharing the DREAM.9 spotlight with the likes of Jose Canseco. The full interview is below.

Ariel Helwani: How frustrating has this last year been for you?
JZ Cavalcante: I got injured, and it took a while for me to recover from those injuries. Actually, I recovered fast from the ACL surgery, but it has been good for me. It's like an advantage, you know. I used that time so I can improve and bring my game to a better level. I'm going to be better than before I was off. So, I am really excited to get back. I was supposed to fight on New Year's Eve, but [Joachim] Hansen got hurt on the day of the fight. I was supposed to fight on April 5, but they postponed the fight for May 26. It's like I had already two fights even though I didn't fight in the ring.

Are you getting tired of all the uncertainty that comes with fighting in Japan? It always seems like things are getting postponed or being put together at the last minute.
Yeah, for sure. Especially after the Hansen fight on New Year's Eve. That one was really hard for me; I was embarrassed. It was the day of my comeback fight, and I was training so hard (for it). But everything happens for a reason. I took some time off again, and tried to improve my game. I think I am going to be better. Most important for me is to be healthy, and when the opportunity comes, I am ready.

Do you believe Hansen was really injured?
Coming from Hansen, it's hard to say it was something else. The only thing that was strange was that we never heard anything about (his injury). They told me he had something with his neck, it could be a tumor or something like that. But then after that, nobody said anything, even when I was still asking them. I was just concerned about him, because I know how hard it is for a fighter to stay away from a fight. I was concerned about his personal life. Hansen is a nice guy - I like him. So, that's why I was concerned, but I still have no answer. I don't know what really happened.

What are your thoughts on your opponent next week, Tatsuya Kawajiri?
I have actually been following Kawajiri a long, long time – even before I started my professional career when he was fighting in Shooto. He was always in the top 10. He is a complete guy – a real MMA fighter. So, for me, it's a pleasure. And because I studied him for so long, I am going to try to take advantage of his mistakes.

What do you think are the biggest mistakes he usually makes in fights?
He doesn't really have any weaknesses. You just have to find how to put pressure on the fight. So, I'm working on my intensity.

Due to the fact that you haven't fought in over a year, do you think that the MMA community has forgotten about you a little bit?
It's normal, you know? When people don't see you in action, they forget about you. Like we say in Brazil, 'You gotta kill a lion everyday to survive in the jungle.' So, I'm not really concerned about what everybody else is thinking or rankings. I fight because I love it. I have been doing this since I have been a kid, and I am going to still do it.
How many fights do you have left on your DREAM contract?
I have one year left with them, or three more fights.

Who would you like to fight after Kawajiri?
After this fight, if I beat Kawajiri, I will fight the winner of [Shinya] Aoki vs. [Joachim] Hansen (on July 20). So, I will fight for the (DREAM) title against one of them. I don't care who wins their fight. I want somebody who has the belt; I'm not looking for one fighter. I am looking for the guy with the belt.

Are you still interested in pursuing a fighting career in North America?
Yeah. I live in America, so it would be good for my career, even with sponsors and everything. But they treat me so good in Japan, so I have to see what is best for my career. Japan is still better for me.
You think you can make more money fighting in Japan right now?
Yeah, because people know me more overseas. (In America), only people who are really into the MMA game know me well. The guys who just follow UFC, they think that UFC is MMA. If I tell people on the street I train MMA, they say, 'Oh, you know UFC?' So, here it's all about UFC, they don't know about overseas.

It was recently reported that you are interested in potentially fighting for Bellator Fighting Championships in the future. Are they your top choice outside of DREAM?
I went to Bellator and met the owner, and they were talking. It's just talk. But if they can make it happen, that would be good.

Would you rather first sign with Bellator before, say, UFC, WEC or Strikeforce?
Well, the thing is, if I fight with Bellator, I could keep fighting in Japan. But the UFC would never allow this. So, that's the main thing.

Has the UFC approached you recently about fighting for them?
They spoke with my manager, but nothing serious. Just talk.
Also on the DREAM.9 card is the first round of the Super Hulk Tournament. What do you think about fighting on the same card as Jose Canseco?
Japan is going through a rough time with MMA, so they are trying to do anything interesting for the fans over there. So, they are going to try to do those crazy matches, but I don't really like it. It's not nice to see a baseball player like Canseco coming to fight MMA. I don't know how the guy is training. He can be a surprise, but he can also hurt himself inside the ring.

Are you annoyed that you have to share the spotlight with a ridiculous fight like that?
No, I am not insulted. They don't come to me and offer me a freak show fight. It's a business like everything else. They have to take care of the show, and do what is best for the show. In Japan, people like that, so what can we do?
Recently, Aoki took part in an exhibition grappling match against Fedor Emelianenko. Would you ever agree to something like that?
An exhibition would be okay. Promotion and everything like that is cool. But it's crazy to take a fight like that against a heavyweight. My mentality is that I can fight anybody, but it's not good for my career.
Who do you consider to be the best lightweight fighter in the world right now?
I like BJ [Penn]; he's been doing a lot of good. Shinya Aoki is doing good. You know, lightweight is a really hard weight class to say, 'Oh, this guy is No. 1.'

How many times do you expect to fight in 2009?
Until the end of the year, I want to fight (against Kawajiri), for the belt and then one more time. So, every two months. I want to kick some ass, man. There's still good guys in Japan, and I want to fight them.