Heath Herring Out of UFC 99 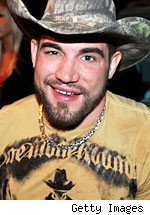 Heavyweight Heath Herring, who had been scheduled to fight Cain Velasquez in the co-main event at UFC 99, will not fight on the card as scheduled, FanHouse learned Tuesday.

FanHouse's Ariel Helwani first got the news that Herring is out. I separately confirmed with a source close to Herring that he has been battling an illness for weeks and unable to train.

It is not known at this point what will happen with Valasquez, a former Arizona State wrestler who is one of the brightest young heavyweight prospects in the UFC.

One option -- and this is pure speculation -- is that Velasquez could fight Mirko Cro Cop, who was confirmed for the UFC 99 card on Monday. Cro Cop was expected to take on Mostapha Al Turk, but a Cro Cop-Velasquez fight would be much bigger than Cro Cop-Al Turk or Herring-Velasquez.

UFC 99 takes place June 13 in Germany, with a main event of Rich Franklin vs. Wanderlei Silva.