Herb Dean Screwed Up With DQ in Strikeforce Main Event 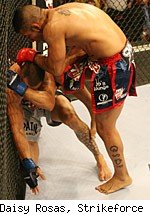 Herb Dean is one of the best referees in mixed martial arts, but even the best make mistakes. And Dean made a big one Friday night when he disqualified Billy Evangelista for what TV replays and the photo on the right showed was a legal knee to the shoulder of Mike Aina in the main event of the Strikeforce Challengers show.

Dean thought Evangelista had landed an illegal knee to Aina's head while Aina was on the ground. So when Aina couldn't continue fighting because of a possible jaw injury, Dean awarded the fight to Aina by disqualification. That, however, was the wrong ruling.

Evangelista actually landed a legal knee to Aina's shoulder, and when Aina couldn't continue, Evangelista should have won by TKO. It was a disappointing conclusion for all involved -- including Aina, who said in the cage afterward that he didn't want to win that way.

It's possible that Evangelista could file a protest with the California State Athletic Commission to get the result overturned, but whether that happens or not, I hope Strikeforce puts Evangelista and Aina in the cage together again so they can settle it once and for all.

I also hope that this doesn't lead to the use of instant replay in MMA, which was mentioned during the Strikeforce telecast on Showtime as a possible remedy for such mistakes. One of the great things about MMA is how fast-paced it is, and the last thing the sport needs is to be slowed down by replay reviews. Dean made a mistake, but adding instant replay would make that mistake worse.