Say Goodbye to MMA in Montreal 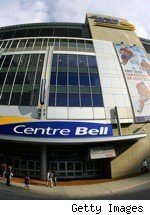 If I didn't know any better, I would think that the Régie des alcools, des courses et des jeux, which governs alcohol, racing, gambling and combat sports in the province of Quebec, is doing its very best to ensure that no major mixed martial arts promotion ever holds an event in that province again.

After threatening to cancel UFC 97 due to some last minute rules discrepancies, and now forcing Bellator Fighting Championships to move its May 29 show to Monroe, La., Quebec officials are on the verge of killing off one of the best MMA markets in the world.

What a horrible shame.

In February, the commission told the UFC that they would not be allowed to hold an event in Montreal if its current rules and patented Octagon were to be used. This news came as a shock to UFC officials, since they held the highly successful UFC 83 event in Montreal 10 months prior. More than 21,000 people attended that show, generating $5.1 million in ticket sales. However, according to an online report, the commission claimed that they were unaware it even took place.

The commission reportedly wanted the UFC to hold their fights in "a much smaller cage than the UFC's patented Octagon, prohibiting elbow and knee strikes and requiring that the referee to halt a bout should a fighter get knocked down from a strike in order to ensure the downed fighter is OK to continue."

In the end, UFC 97 was saved and it yielded a $4.9 million gate -- the fourth-highest in UFC history.

Montreal has always been a hotbed for mixed martial arts, as the now-defunct TKO promotion consistently drew large crowds at the Bell Centre over the years. Naturally, it was only a matter of time before other MMA promotions came to town, as well. The upstart Bellator FC looked to capitalize on the growing popularity of the sport in Montreal by booking a show at the Bell Centre on May 29. After already holding a local press conference to announce the show and a little over two weeks before the event, they were told that they would have to make significant moderations to their cage if they wanted it to happen.

"It's a bit of an odd situation," Bellator CEO, Bjorn Rebney, told FanHouse on Tuesday via e-mail, "as the round 30-foot cage we use is the best in the industry and is approved by every Commission, State and First Nation Indian Commission we have worked with."

This commission can't be that incompetent, right?

Rebney went on to say that while he may have been open to working out some kind of an agreement, the nature of his organization's ongoing tournament doesn't allow for him to change the rules for only one event.

"Our round cage has been used in the opening rounds and semi-final rounds of every tournament fight we have promoted," he said. "So, to alter the 'playing surface' with this much on the line in the semifinals of the middleweight tournament did not make sense. If our events were one-offs, where no single event was tied to all others, then a different cage or different set up might not be a big deal, but with every tournament fight having taken place in the exact same set up, altering that environment for a single event did not make sense. Additionally, our lighting set up, grid, sound and screens are all designed around that specific cage set up."

Attempts by FanHouse to reach the commission for comment were unsuccessful.

The commission has also forced the local XMMA promotion to cancel their May 16 show "due to technical difficulties with the commission." XMMA has taken TKO's spot as the No. 1 local promotion in Quebec, however, one must now question whether they will be able to continue promoting shows in the future.

At one time, Quebec was applauded for accepting MMA long before most major American states. However, following the controversy that broke out after the inaugural StrikeBox event in February -- an event and promotion that was doomed the moment it was launched -- the commission realized that their rule books were not up-to-date. Now, after almost a decade of sanctioning events in the province under the unified rules of MMA, the commission is pretending that none of those took place, and it's time to tinker with a really good thing.

As a result, one of North America's strongest supporters of MMA has turned into one of its biggest nuisances. With the possibility of Ontario legalizing MMA on the horizon, I wouldn't be surprised if the UFC stayed away from Montreal for a long time.

At this point, better to just ban the sport in the province than to tease fans by announcing events only to force promoters to either cancel or relocate just days before. It's pretty much dead there anyway.