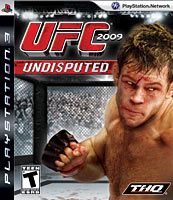 In developing the upcoming UFC 2009 Undisputed, video game publisher THQ worked with the UFC on a feature that allows players to recreate 12 classic fights from the last few years.

"We wanted to have fights that were significant in the UFC, that were entertaining, and would pose good game play challenges as well," said Wesley Bunn, one of the THQ designers who worked on the game. "The goal is to try to replicate the fight as it actually played out, and if you do, you get an unlockable montage of the fight itself."

The 12 fights were chosen with the help of UFC matchmaker Joe Silva. The list of fights chosen follows:


"Joe Silva has been helping us a lot, with this mode and with developing the roster," Bunn said. "One fight that Joe was particularly involved in was including the Ultimate Fight Night 6 match-up between Diego Sanchez and Karo Parisyan. A lot of people who were new to the UFC may not have seen that fight, and it was an excellent fight, so I'm glad we were able to let players try to recreate how Diego Sanchez was able to win that."

One of Bunn's favorite fights was the rematch of Chuck Liddell against Tito Ortiz at UFC 66.

"The third round went back-and-forth, with both fighters connecting with some pretty good shots. Ultimately the outcome was the same, as Liddell came out on top again, but I still thought it was a great fight," said Bunn.

UFC 2009 Undisputed, which will be released May 19, includes the ability to play those 12 fights either against the computer or against a friend, and when the player wins the fight the same way the winning fighter won it in real life, it unlocks a video of the fight itself. Bunn sees these "classic" fights as a way to educate new fans.

"What I've found through playing with other guys in the office is guys who don't know a lot about the UFC is it gives them a sense of who these fighters are and why their fights are important," Bunn said. "When I play with friends who aren't as into the UFC, I think it's fun to use the game to show them why certain fights are significant."