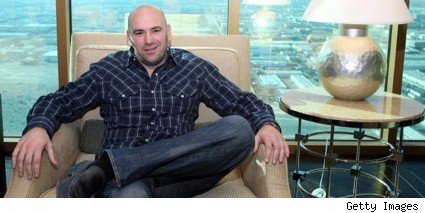 The long-awaited ESPN E:60 profile of UFC President Dana White will air tonight at 7 PM ET, and this afternoon I got an advance look at the full 12-minute profile. It is, as E:60 correspondent Tom Farrey said it would be, a portrait that shows both sides of White's personality: The intense worker who has turned the UFC into a huge success, and the man who has infuriated his competitors and drawn criticism for his temperament.

The first couple minutes of the segment are positive, with celebrities endorsing the UFC, and Shaquille O'Neal comparing White to Oprah Winfrey and Donald Trump. But the focus of the profile then turns to White's infamous rant against Loretta Hunt. Although White acknowledges -- as he has before -- that he was wrong to use an anti-gay slur, he won't say he's sorry for anything he said about Hunt.

"Loretta Hunt ought to apologize to me," White said.

Hunt is featured in the piece saying that White wants to scare the press, while Tito Ortiz shows up to complain that White refused to pay for his back surgery. Pat MIletich acknowledges that White has "done a lot of great things for the sport, without a doubt," before adding that White wants to crush anyone who competes with him. And New York State Assemblyman Bob Reilly, who's leading the effort to keep MMA illegal in his state, is trotted out to call MMA "an unacceptable activity" and White "an unacceptable person."

The profile, which prominently plays the Dropkick Murphys' "I'm Shipping Up to Boston," also gets into White's personal life. White was raised mostly by his mother but says now, "Me and my mom haven't talked in a few years. I have no hard feelings toward my mom at all. I love my mom. The problem is we're so much alike, we butt heads."

The profile has plenty of critical material about White, but ultimately, it portrays him as a man who has done his job well enough to please his bosses, with UFC co-owner Lorenzo Fertitta saying the UFC would have gone out of business if it had chosen a Harvard MBA, rather than White, to run the company. More importantly, the profile shows White as someone who has made the UFC an organization that gives its fans what they want. That's why his approach to running the UFC has worked, no matter who doesn't like it.