Gary Shaw Reality Show Back On 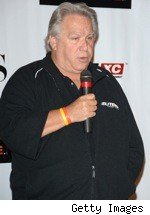 While watching the Antonio Tarver vs. Chad Dawson boxing match on HBO this weekend, I couldn't help but notice a very familiar logo smack-dab in the middle of ring: "Blood, Sweat & Bling," it read.

I knew I had seen this logo before, but it took me a while to actually figure out where. Then, as I noticed boxing promoter, Gary Shaw, pictured right, sitting ringside next to his son, Jared, who appeared to have been shouting instructions at Dawson every moment of the fight, I remembered why that logo looked so familiar.

Brace yourselves, because according to Jared Shaw, the former VP of EliteXC, the Shaw family reality is back in production.

The above clip was actually put together several years ago, long before the Shaws got involved in mixed martial arts and EliteXC. However once it was leaked, the clip apparently generated enough buzz online that it got the wheels in motion to restart production. According to Shaw, new footage was shot last week leading up to the Tarver-Dawson fight (Dawson fights for Gary Shaw Productions), but there is no word as to when and where the show will air.