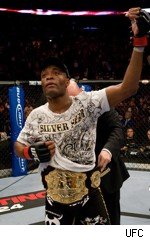 The three best pound-for-pound fighters in the UFC are middleweight champion Anderson Silva, welterweight champion Georges St Pierre and lightweight champion BJ Penn -- at least according to the rankings in the new UFC video game.

The web site PlanetXBox360.com has revealed the full rankings of all the fighters who are in UFC 2009 Undisputed. The list of the Top 10 pound-for-pound fighters in the UFC, with their point values in the video game, is below.

Looks like a pretty good list to me, although I'd have Rampage higher than Sherk or Florian. If there's any fighter who's got a reason to be upset with his video game doppelganger, it would have to be Keith Jardine, who has a rating of 79, putting him well behind Forrest Griffin, Chuck Liddell, Brandon Vera and Wilson Gouveia, all of whom Jardine has beaten.