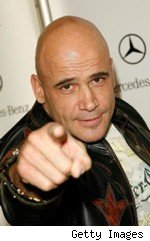 At the April 11 Strikeforce MMA event, Benji Radach lost to Scott Smith by third-round TKO, and he wasn't happy about it. Radach said later that he believes Smith gained an advantage by grabbing the cage in the second round and by hitting him in the back of the head in the third, and that the referee robbed him of the fight.

Radach now says he's going to appeal the fight to the California State Athletic Commission, and try to get his loss overturned. But he's going to have a hard time convincing the commission to take such an extreme action -- especially considering that he hasn't even convinced his own cornerman, Bas Rutten, who said on HDNet's Inside MMA that he doesn't see Radach winning the appeal.

"I think, first of all, it's a little too late," Rutten said. "I've never, ever seen a fight get overruled, overturned. ... I don't think it's going to happen. I wish him luck, but it's a hard thing."

Rutten is, of course, absolutely right that overturning the result is not going to happen, and that it shouldn't happen. Even if you agree with Radach that the referee did miss Smith grabbing the cage in the second round and hitting him in the back of the head in the third, that type of mistake by a referee isn't enough to get a result overturned. Ultimately, the referee is the arbiter of what happens in the cage, and the referee raised Smith's hand at the end of the fight. Kudos to Rutten for recognizing that.