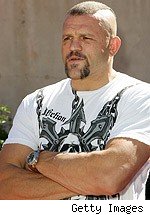 Two new names will be added to the short list of those inducted into the UFC Hall of Fame on July 10 as part of UFC's Fan Expo during UFC 100 weekend.

The UFC has not released the names of the new inductees, but if I were to venture a guess, I would think that former UFC light-heavyweight champion Chuck Liddell is a lock for one of the slots. While Liddell has not officially retired (he's currently on vacation), UFC President Dana White has repeatedly stated "the Iceman" is done in the octagon.

The other honoree could possibly be the first man to enter the Hall who never previously fought in the octagon: the late Charles "Mask" Lewis. While some "purists" feel that the Hall of Fame should be for fighters only, Lewis' contributions to the sport are immense. Behind his TapouT brand, he sponsored a slew of fighters when there was little reason and almost no monetary reward for doing so, helping to keep MMA alive in times of dire circumstance. He spread his passion for the sport through a grassroots approach, making fans as he traveled the country as the sport's pied piper before tragically dying in a car accident in March.

In addition, Lewis was very close to both White and Zuffa co-owner Lorenzo Fertitta, and since the voting committee is essentially composed of those two, it stands to reason they would consider him to be part of their sport's Hall, even after adding his name to an octagon bumper where they say it will stay for as long as they run the UFC.

Other possibilities for induction include the late UFC middleweight champion Evan Tanner, who died last Septemer while hiking in a California desert, and to a lesser extent, Matt Hughes, who will surely someday be inducted but is still active. Hughes will fight Matt Serra on May 23's UFC 98, but has openly talked about retirement in the last year or so.

UFC 100's Fan Expo is the first such event in the company's history, taking place on July 10-11 at the Mandalay Bay Convention Center in Las Vegas.

If you had a vote, who would you elect into the UFC's Hall of Fame? Voice your opinion in the comments section below.