Randleman vs. Whitehead at Strikeforce 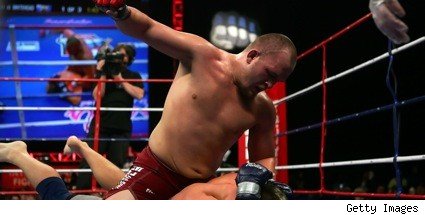 Kevin Randleman will make his Strikeforce debut on June 6 after all. FanHouse has learned that the former UFC heavyweight champion has been booked against Mike Whitehead in a light heavyweight matchup on the upcoming Strikeforce card at the Scottrade Center in St Louis.

FanHouse reported two weeks ago that Randleman had turned down a fight against Rafael "Feijao" Cavalcante after current Strikeforce light heavyweight champion Renato "Babalu" Sobral pulled out of his scheduled title defense.

Come June 6, both Randleman (17-12) and Whitehead (23-6) will be making their Strikeforce debuts. Whitehead, a veteran of WEC, UFC, IFL and Affliction, last fought in October 2008, winning via guillotine submission choke against Leo Pla at an M-1 Challenge event in Kansas City. Prior to that victory, he lost to Sobral at the inaugural Affliction show in July, snapping a 13-fight winning streak.

Meanwhile, Randleman is attempting to reignite his once-promising MMA career. The 37-year-old has only competed twice since October 2005. His last fight was a unanimous decision victory against Ryo Kawamura at Sengoku II in May 2008.

Following a 2006 loss to Mauricio "Shogun" Rua at PRIDE 32, he was suspended by the Nevada State Athletic Commission for submitting a fake urine sample. He has since been cleared to fight in Nevada once again.

The newly married Randleman has battled a plethora of serious injuries over the years, but appears to be finally ready to make one last run as part of the growing Strikeforce light heavyweight division.

Below is a look at the updated main card lineup for Showtime's June 6 Strikeforce show: