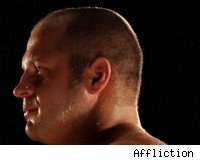 After two consecutive lackluster showings, UFC middleweight champion Anderson Silva is no longer considered by most observers to be the best pound-for-pound fighter in mixed martial arts, a new poll of MMA journalists has found. Instead, the consensus opinion now is that Fedor Emelianenko and Georges St Pierre are the best in the world, with Silva now third.

The latest Yahoo! Sports MMA poll has Fedor and GSP tied for first. Emelianenko got the most first-place votes, but St. Pierre ended up with the same number of points because most voters who didn't have him first had him second, while Fedor is outside the Top 2 on several ballots.

Silva is now behind them both in third place, and Miguel Torres, at No. 4, is closing the gap and has received a first-place vote. UFC light heavyweight champion Rashad Evans rounds out the Top 5, and although Evans didn't get any first-place votes, I think the winner of Evans' May 23 fight with No. 7 Lyoto Machida at UFC 98 will have a very good case.

I am one of the voters, and you can see my ballot here.