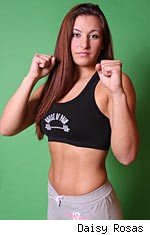 Miesha Tate and Sarah Kaufman have a mandate, and that's proving to the world that women's MMA goes deeper than just Gina Carano and Cris Cyborg.

The pair gets the opportunity to do so on May 15's Strikeforce Challengers event in Fresno, Calif., broadcast on Showtime.

Tate was originally booked to fight Kim Couture on the event, but after the latter dropped out due to personal reasons, she was replaced by Kaufman, who openly campaigned for the fight and got her wish granted when Strikeforce president Scott Coker moved her from a June 19 match with Shayna Baszler. Barring injury, the winner of the Tate-Kaufman bout will face Baszler.

"I'm fighting a strong fighter. She's hungry and I'm hungry," said Tate (5-1). "It's a great opportunity in front of me, and I plan to take full advantage of it and come out with a win. We're two people who are serious about the sport, and our learning curve is fast right now. You guys are going to see top-level women's fighting on May 15."

Tate vs. Kaufman is at least on paper, your classic grappler vs. striker style clash. Tate wrestled in high school -- on the boys team -- and took up MMA in college. Kaufman, meanwhile, is 8-0 and has finished all eight of her opponents via KO or TKO.

To date, Kaufman has faced a slightly higher caliber of competition, but it was the draw of fighting on a featured Showtime attraction that lured her in, along with the chance to derail a rising star. Despite less than a month between fights -- she won her last match on April 23 -- and the possibility of fighting three times in three months, she feels up to the challenge.

"I wouldn't have taken the fight if I wasn't sure I could showcase what I could do. As soon as I heard Kim was out, I started talking to my coach, saying, 'I think I should do it, take this fight.' I don't feel overtrained, and I didn't get any injuries last time out, so I have no excuses, and I think it should be a great fight."

And for Tate, although Kaufman represents a signficant increase in experience level from Couture, she also potentially becomes a higher quality win.

"The more I thought about it, it became a win-win situation for me," she said. "It's a great opportunity. She has an undefeated record, and I have the opportunity to be the first one to beat her. I'm going to go for it. It's going to be a great showing and I hope it's fight of the night."

Couture's future as a fighter, meanwhile, is unknown. Earlier this week, several news outlets reported that she and husband Randy Couture are splitting. Asked if Kim would resume her career in the cage, Coker said that was a question for her to answer in the future. Ironically, it was Tate who first posted the news online in frustration of losing her opponent. She soon after apologized, saying she should have been more mindful of the Coutures' celebrity.

"I realized in my haste of being frustrated, it wasn't my place to talk about anyone's personal business," she said. "Whether it's right or wrong, it's not my place to say. So that's why I apologized, said, 'Whoops, I made a mistake.' That's pretty much all I could do."

Come May 15, the focus returns to the drama of the cage, just where they want it.