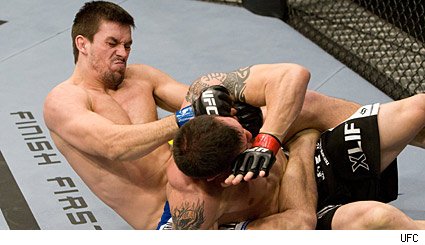 If a UFC fighter was unbeaten and had knocked out nine of 11 opponents, including five in a row, there'd be a fan frenzy around him. But change the knockouts in that formula to submissions, and it's a whole different world.

Demian Maia has an undefeated MMA record, a ridiculous string of submission victories, and one of the most impressive Brazilian jiu-jitsu pedigrees in the sport.

A title shot? He's still waiting for that.

Even at 11-0, the UFC middleweight will need at least one more win to prove he's ready. He gets that opportunity at August's UFC 102 against Nate Marquardt.

In the days since Anderson Silva's choose-your-own-adjective decision win over Thales Leites (I'll go with "lackluster"), it's been suggested by some that the UFC backed off a potential Silva-Maia middleweight title fight due to a concern that a similar style, striker vs. grappler matchup would produce the same result. Maia says such a scenario would never happen.

"All of my fights, I try to end the fight. That's my style," he told FanHouse. "I have an aggressive style that's part of my personality. So probably the fight is going to end before the [closing] bell. I go inside. That's not something I choose; it's my instinct. If I can't take him down and finish, he may knock me out, so it's not going to be the same fight."

The 31-year-old has managed to submit every one of his UFC foes. That's a stunning statistic in this era of well-rounded fighters. In fact, UFC middleweight star and fellow jiu-jitsu standout Ricardo Almeida recently told me that Maia is the best BJJ player in MMA, and perhaps in the sport's history.

His detractors say that he is one-dimensional. Even if that was the case, so what? Mariano Rivera is one-dimensional; he has one pitch and used it to become the greatest closer in history. Randy Moss will be an NFL Hall of Famer for excelling at one route: the post pattern. And Andy Roddick's colossal serve won him one major title and more importantly, Brooklyn Decker. But I digress. The fact is that Maia's ground game has thus far proven impossible to stop.

Maia doesn't get huge attention, but there is at least an appreciation for what he does. There has been a buzz in the crowd during his last few fights. Because whether it's knockouts or submissions, people want to see fighters looking for a finish, and with Maia, danger always looms.

"My game is aggressive," he says. "When I fight, nobody boos. Everybody likes it. Everyone cheers for me. I'm happy about that, because I'm one of the guys who is putting the grappling and jiu-jitsu on the level where people are interested in the technique. I can get people excited about it."

Maia is so dedicated to his art that he says if he could script the rest of his career, he wouldn't score a single knockout, opting to win every fight by submission.

"I don't like winning in a violent way," he says, in words that have probably never come out of the mouth of another pro mixed martial artist.

Of course, that is very different from Silva, whose matches usually include bursts of violence -- UFC 97 notwithstanding. "Anderson was playing around. He did what he did to win. And Thales is a good fighter, but somewhere in the fight, he lost confidence," Maia said.

That's never been an issue for him; he's always been a natural at it. After a lifetime of other martial arts, he starting training BJJ at age 19 and earned his black belt in just over four-and-a-half years, about half the time it takes those most dedicated to the art. But it was always with the goal of fighting MMA.

Without question, Marquardt presents his most difficult test. The Greg Jackson-trained Marquardt is also a jiu-jitsu black belt but has very good striking and wrestling. He is also a naturally bigger man that Maia, who only cuts about 10 pounds to make the 185-pound limit.

Naturally, the good-natured Maia holds no ill will toward the UFC for passing him over for a shot against Silva. Jiu-jitsu, after all, is about anticipating future moves, not dwelling on what has already happened.

"I was a little disappointed in the beginning, but things happen the way they should happen. I'm not thinking about it. I'm thinking about this fight. If I can't have Anderson right now, no problem. Nate is one of the best in the business, and it's a good test."

For now, he will continue to prepare. He has spent quite a bit of time in the last few years training his standup, sometimes with fellow countryman and friend Wanderlei Silva, but don't expect much to change in his approach.

"The striking game is always a lottery game, so I prefer to take the safe situation," he says. "Submission is the best for me. I'm the guy looking for it all the time."

In other words, everyone knows what's coming. Just try and stop it.