MMA to Roy Jones: You're Not Welcome 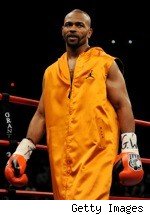 UFC president Dana White recently stated that he has no interest in ever booking a Roy Jones Jr. vs. Anderson Silva mixed martial arts match. Apparently, Strikeforce wants no part of the former pound-for-pound boxing king, either.

Strikeforce CEO Scott Coker revealed on Wednesday's conference call to promote the May 15 Strikeforce Challengers event on Showtime, that Nick Diaz's manager called him hours prior to see if he would be interested in setting up a Nick Diaz vs. Jones MMA match. While Coker appeared to be lukewarm to the idea, his television partner, Showtime Sports SVP and GM, Ken Hershman, made it clear that he wants nothing to do with televising a Roy Jones Jr. MMA match

"I get a Roy Jones call once a week, pitching me things," Hershman said. "That would be a very, very long shot of ever happening on Showtime."

Hershman seems to share White's feelings on the matter, which are that Jones' involvement in MMA would make a mockery of a sport looking to legitimize itself in the eyes of mainstream sports fans.

"I think it's an insult to the integrity of mixed martial arts to think Roy Jones, or any professional boxer, can just come in and fight Nick Diaz in a mixed martial arts context," Hershman added. "In a boxing context, it's completely different. Beyond that, it's not the strategy that we're employing. We're looking to build the best mixed martial arts brand. I believe that we have the best professional boxing brand on television and I think our fights, month in and month out, prove that. I don't see the need to combine the two at the moment ... I wouldn't want to go down that path just now."

I completely agree with Hershman (and White). One can argue that Jones has no business competing against the best boxers in the world anymore, so what makes him think he can hang with the best MMA fighters? Furthermore, any combination of Jones competing against an MMA fighter in either a boxing match or an MMA match is a lose-lose situation for all parties involved. The MMA fighter would most definitely lose to Jones in the boxing match and -- surprise! -- Jones would get creamed in an MMA match. So, what's the point?

MMA should be past the point of booking these freak show matches against over the hill athletes. Japan will probably never catch on (the recent Jose Canseco/DREAM announcement comes to mind), but kudos to North America's strongest MMA players for putting their foot down once and for all.