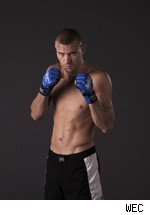 For most MMA fighters, a nickname is just something designed to make them sound tough as their names are called during pre-fight introductions. For Donald "Cowboy" Cerrone, the No. 1 lightweight contender in World Extreme Cagefighting, his nickname is a way of life. Cerrone was a cowboy before he was a fighter, and during his youth in Colorado he took up the sport of bull riding.

Cerrone will return to the cage on June 7 at WEC 41 (televised on Versus), but before then he will return to the bull riding arena when he makes an appearance at the May 16 Professional Bull Riders event in Pueblo, Colorado. Cerrone says he won't be climbing back on a bull any time soon because he doesn't want to risk an injury that could derail his MMA career, but when I interviewed him Tuesday, he talked about his passion for both sports. The full interview is below.

Michael David Smith: How did you first get involved in bull riding?
Donald Cerrone: I started bull riding in high school (at Air Force Academy High in Colorado Springs), I just met up with a friend who was doing it in the 4-H program. I got really into it and started chasing the rodeo through North Dakota, South Dakota, Wyoming, Colorado.

And you started competing in bull riding?
Absolutely. PRCA (Professional Rodeo Cowboys Association), which is one step below the PBR (Professional Bull Riders). It's like playing AAA baseball.

Which sport is tougher, MMA or bull riding?
Well, they're two totally different sports. I'd say MMA is tougher, but bull riding -- there's just nothing like it.

Is there anything you learned from your bull riding days that helped you become a successful MMA fighter?
It taught me to keep my hips tight. I've got a real strong guard and a real strong mount because my legs are strong, from years of riding bulls, using that pressure, squeezing my legs together to keep on the bull, it's the same thing, you're riding a person and you're trying to keep on him.

What would you tell an MMA fan who doesn't know anything about bull riding to expect to see on May 16?
Well, PBR is the professional level of bull riding, and all the top dogs are going to be competing to see who brings home the biggest cash prize. If you watch, you're going to see 25 cowboys trying to get on the backs of a 1,900-pound bull and trying to ride it for eight seconds. The scoring is half the bull, half the rider, so you're trying to combine the best score between you and the bull to win. ...

I love both MMA and bull riding. I wish I could do bull riding again, but the problem is there's just too much risk of an injury. You're hurt all the time, whether it's pulling your groin or getting stepped on or getting your shoulder torn up, but I love to watch this sport and participate in it.

Your next fight is on June 7 against James Krause, who's making his WEC debut. What do you know about him?
I really don't know too much about the guy, to be honest with you. I know he's 10-0, I heard he won his first nine fights by submission and then won his last fight by knockout, so he probably feels like he can stand with me or he can use his jiu jitsu. Of course, I won my first nine fights by submission, too, so I'm not too worried about his jiu jitsu. But I think I can beat him with my striking, or on the ground -- either way, I don't really care. I don't think he's fought anybody real, real tough, so I'm looking forward to going in there and welcoming him to the WEC.

His record is impressive but he hasn't fought in any of the big promotions. Have you been able to find any tape of him, or find his fights on YouTube?
I found one of his fights on YouTube, but it looked like it was shot from someone's camera phone in the bleachers, so I couldn't really learn anything from that. But that's good because I'm looking forward to going into this fight open-minded. I don't feel like I need to worry about, "Oh, he's got a good right hand" or like he's got some particular strength that I need to fight around.

I know you work with Greg Jackson, who is big on preparing game plans for his fighters. What does he want you to work on going into this fight?
For this fight he told me, "I just want you to open up. I'm not worried about your ground game, I'm not worried about your standing up, I just want you to open up with this guy." He's been working with me on opening up my feet, and then on the ground not sitting in my guard but working to get back on my feet, and really just putting it all together. Greg's a genius when it comes to game planning, and he told me just to open up and go in there and do what I need to do.

I've heard a lot of fighters say Greg's a genius, from Georges St Pierre to Rashad Evans to Keith Jardine to Leonard Jackson. What is it about him that makes him such an effective coach?
He just looks from the outside in, sees everyone's weaknesses and everyone's strengths, where you can take the fight and win the fight. That's what he does best, and that's why we trust in our coach.

Your last fight, losing to Jamie Varner by technical split decision, featured a fairly controversial ending. Now that you have a few months to look back on it, are you upset with how that went down?
I'm not upset at all. I had gone undefeated in kickboxing and before then I was undefeated in MMA, and I kind of needed a loss. I feel like I won by losing. I got a loss out of the way and I know now that I need to go out and fight my fight -- I didn't fight my fight. I laid in my guard, I was sloppy. You can't be a champion without losing. Losing is the only time you can sit back and really assess what you did wrong.

Do you expect to get another shot at Varner's lightweight title?
Yes. I was hoping my next fight would be a rematch with Jamie, but his hand is injured or something is wrong and he's not ready to fight, and I wasn't going to wait a whole year and not fight. So I'm in line, as long as everything goes OK in this fight.

Aside from that, are there other goals you have in MMA?
My goal is always to fight the best. I always want to fight the best lightweight there is. I'd love to fight Kenny Florian or BJ Penn. Those are the kinds of fights I'm excited about, and I keep pushing in training every day to get to the top so that when people think about the 155-pound weight class, they think, "Cowboy. Cowboy is the best." That's what I want, to be the best fighter at 155.

Cowboy is more than just a nickname to you, isn't it?
Yeah, that is my name. My grandma, my mom, everyone calls me Cowboy. When I was a kid I used to wear cowboy boots and a cowboy hat, and that's my name. Even before I started riding and before I started fighting, that was my nickname, Cowboy. That's what everyone knows me by. When people call me Donald I think, "That's a weird name." I'm Cowboy.