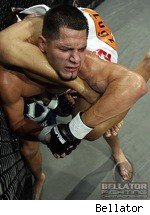 The upstart Bellator Fighting Championships mixed martial arts promotion held its inaugural show on April 3. However, when historians look back on their growth as an MMA organization, they will probably point to Friday, May 1, 2009, as their official launch into the MMA space.

On that night, in the Hara Arena in Dayton, Ohio, Toby Imada pulled off one of the most shocking submissions in MMA history when when he choked out Jorge Masvidal with an inverted triangle.

Bjorn Rebney, Bellator FC's founder and CEO, believes the buzz created by that submission is proof that his organization has arrived.

"It has been a tremendously positive moment for Bellator Fighting Championships," Rebney, who also founded the Sugar Ray Leonard Boxing promotion in 2000, told FanHouse on Tuesday. "I've now watched it probably 150 times, trying to figure out if what I am seeing is real and it's stunning in what Toby was able to do. But more importantly for us as an organization, it speaks directly to everything that I intended Bellator to be. That's the key.

In a crowded MMA marketplace, Bellator FC is the new kid on the block. It's certainly going to take a lot more than a spectacular submission to turn the organization into a success. However, with their solid ratings on the Spanish-only ESPN Deportes on 24-hour tape delay, Rebney believes that a future live time slot on ESPN2, as has been discussed by both parties, will help propel the organization into a new dimension.

"... I think that ESPN is the perfect, perfect vehicle for this programming. I think the demographic fit is magical. Obviously, they are the worldwide leader in sports programming (and) they attract a viewer and consumer base that you would ideally want to hit in the perfect scenario from an MMA perspective."

The next Bellator FC event takes place this Friday in Robstown, Tex. Their inaugural season wraps up on June 19 in Hollywood, Fla., with the now much-anticipated Toby Imada vs. Eddie Alvarez lightweight tournament finals. By then, the organization would have crowned a new featherweight, welterweight and middleweight champion. Next season, they hope to hold a light heavyweight and heavyweight eight-man tournament, as well.

Get used to seeing Bellator tournaments, because Rebney says they will be the backbone of the organization.

"The tournament structure is something that we will be absolutely sticking with," he said. "The fan reaction to it and the consumer response has been everything I hoped it would be and everything I thought it would be ... So, we're going to stick with it. When a fighter wants to earn the right to fight either Toby Imada or Eddie Alvarez for our lightweight title, he's going to have to earn that right through being paired against seven of the other greatest fighters that we can find for the tournament and winning that tournament structure."

Bellator will not have any trouble differentiating itself from the competition. Their model is to hold approximately 12 weekly shows in different cities per season. This is an ambitious goal because it doesn't allow for much time to promote events, matchups and fighters. However, Rebney believes that his week-to-week model will be the key to Bellator FC's success.

"... I think you gotta be week-to-week. I think you got to just consistently put on higher-level, more exciting, more compelling fights with great back stories behind the fighters to build to that crescendo. I think that once a month programming is a very, very difficult dynamic to be able to capitalize on to get to that promise land."

Rebney is hoping that the second season will be successful enough to potentially justify a pay-per-view debut in late 2009 or early 2010. He believes that one of the reasons why the IFL and EliteXC failed is because they never built towards pay-per-view events, which is obviously where the organization stands to make most of its money.

"We paid attention like crazy to what they were doing incorrectly and have tried desperately to shy away from it," Rebney said. "(We) tried desperately to not find ourselves in that spot and to not make similar mistakes to those made by the IFL, Elite, and obviously Affliction, I don't know what their current status is, but they're not in a growth curve. Let's put it that way."