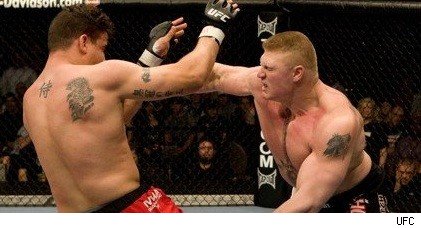 The main event at UFC 100, the heavyweight title fight between Frank Mir and Brock Lesnar, would be huge even without any trash talk between the two. But the fact that Mir and Lesnar are speaking up about their disdain for each other is adding heat, and making fans even more excited.

The latest example comes from Mir, who tells MMA Weekly thathe thinks Lesnar's resume as a fighter is thin, and that he thinks Lesnar needs a good coach to show him how to be a martial artist:

"At this point, I think he's going to do whatever causes a distraction from his qualifications," he said. "I think that a lot of people realize that he was only 1-1, he had a .500 record in the UFC when he got a title shot. So I think the more that he can scream about my belt, people maybe don't look at his. ...

"Three or four years from now, if I decide to switch over into full time coaching, I would like to coach Brock," said Mir. "I see a lot of things that he's done in his last couple of fights that I think are mistakes that are not really his fault, they're maybe his trainer's faults. How can he be so talented, an NCAA champion, probably one of the best wrestlers to come out of college in the heavyweight division, and still make some of the real basic balancing and footwork mistakes that he's making right now?"

Mir launched into his criticism of Lesnar to respond to Lesnar's previous claim that Mir has a make-believe heavyweight championship belt, and that Mir might be faking an injury to delay their fight. Mir has also compared Lesnar to Ultimate Fighter bad boy Junie Browning, which from Mir's perspective is about as harsh a criticism as there is.

Pre-fight talk, of course, doesn't really matter. What matters is that on July 11 we'll see the UFC's two best heavyweights fight for the championship. But I have to admit, I'm enjoying hearing these guys talk smack to each other. I just hope the fight itself lives up to the hype.