Fedor vs. Barnett 'Not Finalized Yet' 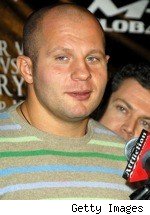 The Russian version of the M-1 Global website announced today that Fedor Emelianenko and Josh Barnett will finally meet at Affliction 3 in early August.

However, when FanHouse contacted Affliction Entertainment VP, Tom Atencio, on Monday, he said that the organization's third event is not a done deal.

"I haven't finalized it yet," Atencio said. "You know me, I like to get everything finalized before making an announcement."

"I'm doing something Dana White won't do and that's fight," Atencio said at Monday's press conference. "He talks like a fighter, so why doesn't he fight? I'm stepping up to the plate and win, lose or draw I attempted it. I don't ever think he would fight."

Whether or not Emelianenko vs. Barnett is official, the fact that M-1 Global and Atencio are even acknowledging a third event has to be seen as a good sign for Affliction MMA fans. The promotion was once rumored to be on the verge of closing its doors earlier this year. And of course, where there's smoke, there's fire. M-1 Global, one of Affliction's partners, must have had a pretty good reason to post that news.

Obviously, things can change at any instance, but it seems pretty safe to say that Affliction 3 will happen later this summer. You can probably also bet that the heavyweight matchup featuring arguably the two best big men in the sport will headline the event. Atencio said that Emelianenko vs. Barnett is the fight he has wanted to make since January and is confident it will finally happen.