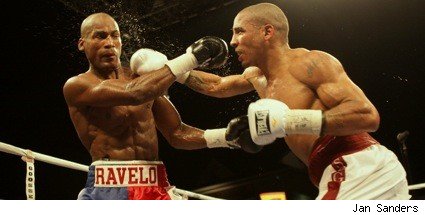 Boxing enthusiasts already know that Andre Ward (18-0) is one of the best young 168-pound fighters in the world. What they may not know is that he recently considered trying his hand at mixed martial arts.

"I thought about it," Ward told Fanhouse on Monday. "Not in terms of taking it up as a career, but kind of like a one and done kind of thing. "

However, Ward was quick to mention that he is not seriously considering any offers to compete in an MMA match.

"You know, I probably wouldn't do it," Ward added, "it's not for me, man. I enjoy watching those guys because it's an art, just like boxing. I appreciate it and I love watching it. You know, Urijah Faber is one of my favorite guys and I may even go to his fight in Sacramento coming up (WEC 41, June 7).

The 2004 Olympic Gold Medalist said that he was approached "six or seven months ago" by a fighter who trains at his gym about competing in MMA, and after considering the opportunity briefly, opted against it.

"Whenever I do something," Ward said. "I want to do it full steam ahead. I probably would not be too excited about the whole ground game and working on that and stuff, so I wouldn't put myself in that situation ... I'm a supporter of MMA; I'm not against. But you probably won't see Andre Ward in the cage anytime soon.

The lack of young American boxing stars is disheartening, especially in the heavyweight division. However, Ward, one of the best young American boxers, thinks that the sweet science is in no danger of being pushed aside by MMA.

"Boxing has been here forever, and I don't think any contact sport will ever supercede the sport of boxing," Ward said.

Ward's next fight is against Edison Miranda (32-3) on May 16. The fight airs live on Showtime.

Note: Our full-length interview with Ward, which focuses on his upcoming fight against Miranda, will appear later at Boxing FanHouse.