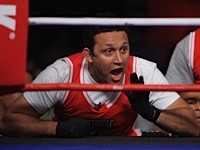 MMA pioneer Renzo Gracie is in the midst of helping Matt Serra prepare for his UFC 98 grudge match with Matt Hughes, but he also has some personal long-term goals in mind. Gracie, who has not fought in over two years, recently told TriStateFighter.com that he plans to return to action in late 2009.

Gracie has not fought since February 2007 in the maiden voyage of EliteXC, and was awarded a victory in the main event after Frank Shamrock was disqualified for delivering an illegal knee while Gracie was grounded.

Gracie has fought just four times in the last five years, and is 13-6 with one draw and one no contest in his career.

The 42-year-old legend runs one of Manhattan's most popular martial arts schools, Renzo Gracie Academy, and is currently in the process of opening two new schools, one in Stamford, Conn., and another in Holmdel, N.J. After getting those schools opened, he plans to commence serious training for a fight.

"If they're willing to take an old man in, I'll be there," he said.

Gracie, who had a documentary -- Renzo Gracie: Legacy -- about his fighting career released in 2008, has faced some of the biggest names in the sport, including Dan Henderson, BJ Penn and Kazushi Sakuraba. He holds wins over four ex-UFC champions: Shamrock, Pat Miletich, Carlos Newton and Maurice Smith, as well as UFC 6 tournament champion Oleg Taktarov.

In addition to training Serra, he is also helping Andre Gusmao prepare for his UFC 98 fight with Houston Alexander.